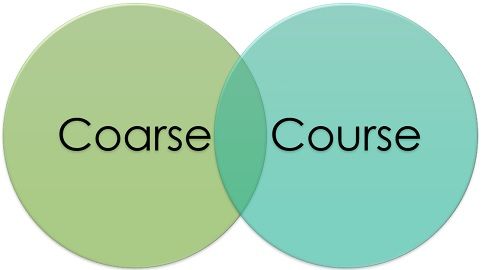 Coarse and course, are a pair of homonyms in English which have exactly similar pronunciation, but their spellings and meanings are contrasting. The word coarse means something that is harsh or rough in nature.

But on the other hand, the word course has to do something with progress, it denotes a path that leads to upward movement or the way of doing something. Let’s take a look at the examples below which will help you to understand the difference between these two.

The word ‘coarse’ is an adjective, which is used when something is dull harsh or lacks smoothness, or when it is raw. Let’s understand its usage with the points given below:

Basically, the word course means route or direction which is used by ships or plane during their journey. It indicates advancement or progress towards something. It also refers to the procedure used for dealing or handling a situation. So, there is an end number of uses of course, which are explained here:

Key Differences Between Coarse and Course

The difference between coarse and course are discussed in the points in detail:

We are quite aware of the fact that the words coarse and course produce a similar sound, but they are completely different in terms of meaning. Coarse is used to denote something rough, impure, cheap or ill-quality material, but the course has several meanings, but they all revolve around route or an upward movement, to proceed from one point to another.