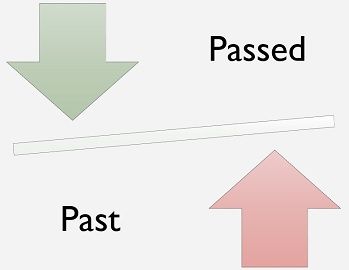 Passed and past are the most confounding homonyms in the English language. However, their spellings and meanings are completely different from one another. While the word passed means to gone ahead, cleared or permitted, past is used to denote an earlier period, beyond or something which ceases to exist in the present time. You can understand the terms with the help of these examples:

Basically, the word ‘passed’ is the past form of the verb ‘pass’, which has several meanings in the English language. However, it is primarily used to denote gone by, elapsed or ceased, cleared etc. Let us now understand the use of the word ‘passed’ in sentences:

Past refers to the period which is over or no longer exists when you are discussing or writing about it. It also refers to a form of the verb, and it can be used as a noun, adjective, preposition and adverb. Let ‘s discuss their usage in sentences:

Key Difference Between Passed and Past

The points presented below explains the difference between passed and past:

Difference Between Wait and Await

Difference Between Threw and Through