Communication involves meaningful sharing and exchange of message between two parties, i.e. sender and receiver, wherein the sender initiates the process of conveying message so as to create an understanding in the mind of the receiver.

Messages are sent with a certain purpose, which can be spreading news, sharing an experience or informing the audience, etc. They can be circulated by speaking, telephone, television, radio, YouTube, newspaper, email, blogs, gestures, body language and also by way of social media platforms like Facebook, Twitter, Instagram, etc.

Communication is when the sender and receiver come together to share, dialogue, commune with one another, by using signals, words, pictures, symbols, so as to create an understanding. It is a dynamic process in which a message, news or information is transmitted by the sender to the receiver, clearly and unambiguously.

Communication involves the transmission and exact replication of the message, confirmed by feedback, so as to trigger an intended action. So, what we have understood with the above definition is explained in the points below:

Communication is an eight-step process: 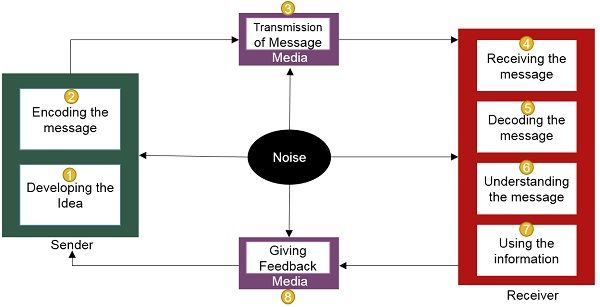 It includes verbal, non-verbal, visual and electronic interaction between people. This means that to communicate something, one can use traditional or offbeat signals, linguistic or non-linguistic (whistles, laugh, yell, etc.) forms.

Mass communication refers to the form of public communication involving electronic or mechanical transmission of information or message simultaneously to many people.

It is the means of spreading a message, news or information to a large, unknown, distributed and diversified masses of the recipient, who are far away from the source of the message. For this purpose, it makes use of mass media, i.e. newspaper, radio, television, social network, internet, magazines, etc, to reach a maximum number of people quickly and concurrently.

Mass communication belongs to the infotainment industry, which informs as well as entertains the general public. It also creates awareness among people, regarding the various government schemes, policies and programmes.

The points hereunder will give you a detailed overview of the difference between communication and mass communication:

In a nutshell, when the message is imparted quickly to a large population at a time, such a process is called as mass communication. In contrast, communication is the process which involves the exchange of message using words, symbols, signs or behaviour, between two or more persons.

Difference Between Verbal and Nonverbal Communication

Difference Between Journalism and Mass Communication

Difference Between Mass and Weight