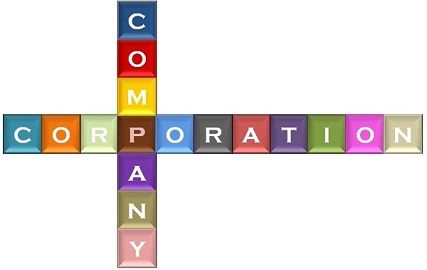 A company can be understood as a form of business organization, which is an association of persons, set up with an aim of undertaking business. It possesses a legal status distinct from its members and governed by the Companies Act, 2013. It is an artificial person, having perpetual succession and a common seal. It is commonly confused with the corporation, which is nothing but a body corporate, registered within or outside the nation.

Generally, corporations used to mean big business houses, whose presence is all over the world. On the other hand, the company has a limited scope as it indicates the business entity which is present in the country in which it is registered. To understand the two terms clearly, read out the given article which incorporates the difference between company and corporation.

The term Corporation as defined in section 2 (11) of the Indian Companies Act, 2013 as a body corporate, which is incorporated inside or outside the country, but excludes co-operative society, corporation sole and any corporation which is formed by the notification in the Official Gazette by the Central  Government.

A corporation is a business organization having a separate legal entity, i.e. its identity is distinct from its owners. It can sue or be sued in its name, with limited liability i.e. the liability of the members is limited up to amount unpaid on shares held by them, having authorized capital of at least five crores, and continued existence. Corporate Tax is levied on the income of the corporation under the Income Tax Act, 1961.

The term Company is defined in section 2 (20) of the Indian Companies Act, 2013 as a company formed and registered under this Act or any other previous acts. A company is a voluntary association of two or more than two persons joined for a common objective, treated as a distinct legal personality and perpetual succession.

The company is considered as an artificial person having a common seal and registered head office. As similar to a Corporation, the company has a right to sue or be sued in its own name.

The company can be of the following types:

Key Differences Between Corporation and Company

The points given below are important, so far as the difference between corporation and company is concerned:

The difference between Company and Corporation is subtle but still the scope of the word Corporation is larger than the Company. Corporate Tax is levied on both the entities as per the Income Tax Act, 1961. Hence, we can say that the terms cannot be used synonymously.

Difference Between LLC and Inc.

Difference Between LLC and LLP