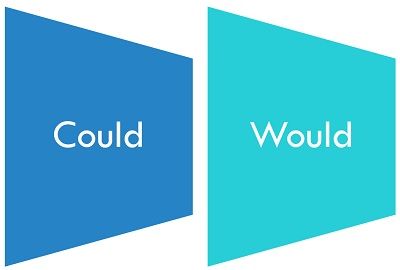 The words could and would are modal auxiliary verbs, wherein both are the past tense form of the verbs can and will respectively. We make use of the word ‘could‘ to express ability or past possibility, whereas ‘would‘ can be used to show willingness or when we imagine a situation.

In the case of polite expressions, i.e. while making offers, requests, invitation, suggestion or permission, we often get confused, which one to use. So, let’s have a look at the examples given below to understand these two in detail:

In the first sentence, could denotes ability, while in the second one it indicates the possibility. On the other hand, would talk about the future, but the outlook is past, in the first case. In the second situation, would is used to make a request.

‘Could’ is used to express past possibility, i.e. something that is possible in the past situation. It can also be used in giving suggestions to someone or making polite requests. Now let’s take a look at its usage:

The word ‘would’ is used to talk about a future time, from the past viewpoint. It refers to something, which is just an imagination, i.e. a situation which is not real or unlikely to happen. It also indicates the willingness or inclination towards something. Let us now discuss its usage:

Key Differences Between Could and Would

The difference between could and would are presented in the points given below:

When it comes to requests, we can use both could and would, but could is more formal and polite than would. While making polite requests, could is used with suggestions, as it indicates a possibility. On the contrary, would is used with offers or invites, because it is more usual.

Difference Between Can and Could

Difference Between Can and May

Difference Between Will and Shall

Difference Between Should, Ought to and Must