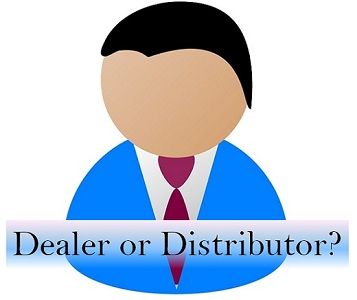 Dealers or distributors can be a person or an entity, who plays the role of a middleman in the distribution process, but they are not one and the same. Dealers are in direct contact with the final consumers. On the contrary, distributors they have a direct connection with the manufacturers as they buy goods from them.

Distribution process refers to the process in which company’s product or service are made available to the customers, by various means like an actual storefront, e-commerce website, multiple retailer or telemarketer. In this process, several intermediaries are involved, which help the product reach the ultimate consumer. Two such intermediaries, relevant to the supply chain are dealers and distributors.

In the article given below, you will find substantial differences between dealer and distributor, take a read.

An individual or a business concern, who is involved in the activities of buying goods for their account and then selling it off from their stock is known as Dealer. In simple words, a dealer is someone who deals in the trading of a particular product. He operates an account, on which he does commercial trading for own self, as a part of regular business.

The dealer is the middleman between the distributor of goods and the consumer. They are the authorized seller of those commodities in the particular area. However, a dealer can attract the customers of another dealer or a different area. In this way, there is a fierce competition between various dealers and they have to behave nicely to the customers to retain them for a long time.

The dealer sells goods of competing brands, out of which one will have a strong customer base while other brands will be serving only a few number of people. He realizes a profit, by selling the goods at a price higher than what he paid for the commodity when he purchased it.

The distributor is an intermediary between the producer of the products and its dealers. They are the one who is responsible for supplying the goods in the whole market. He acts as an agent, in a way that they have a direct contact with the manufacturing entities. He purchases goods from those entities and sells the commodities on their behalf to various other parties etc.

In general, they are appointed and authorized by the companies to sell their products in a particular area. Except the distributor, no other person has the right to sell that product in the specified area, so he is the only source for retailers and dealers to purchase that product. Distributors buy the merchandise from the company in bulk and sell them in small lots to other businesses and stores. They offer some services to the customers like after sales services, replacement service, technical support, etc.

Key Differences Between Dealer and Distributor

The following are the major differences between dealer and distributor

Manufacturers-Distributors-Dealers-Consumers, this is the typical supply chain, through which a product reaches the hands of consumers. Distributors and Dealers are many times used interchangeably, but they are different terms. Distributors serve a larger area and that is why there can be many dealers to whom a single distributor sells its products. Dealers are also known by the name retail distributor.

Difference Between Wholesaler and Distributor