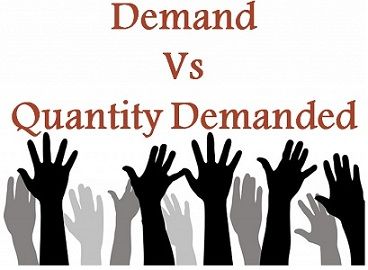 The fundamental difference between demand and quantity demanded is that while demand simply denotes the willingness and a person’s ability to purchase. As against this quantity demanded represents the amount of an economic good or service desired by consumers at a fixed price.

Have you ever observed why the inessential things like diamonds, platinum, gold are very expensive, whereas necessities like food, clothes, water are inexpensive? The only answer to this question is the law of demand, which determines how consumer demand is affected by different factors like price, income, substitute or complementary goods, tastes & preferences and so forth.

Many people often juxtapose the terms demand and quantity demanded in this context. So, let’s take a look at this article in which we’ve simplified the differences.

Demand is defined as the amount of product or service that a consumer or a group of consumers are willing and able to buy at different prices, at a given period. A simple desire to purchase a commodity does not constitute demand as it is not effective, however, ‘desire’ is the major component of it. Effective demand is a combination of three elements, desire, means to purchase and willingness to utilize those means for buying. A demand is not considered as demand if it is not supported by the ability to pay the price of the product.

Therefore demand can be explained at different quantities of a product or service, which could be purchased at various prices/income/price of related goods at a given period. The figure given below represents the shift in demand curve due to various factors such as income, taste or preferences, the price of complementary or substitute goods etc. The rightward shift represents an increase in demand and the leftward shift is an indicator of the decrease in demand. 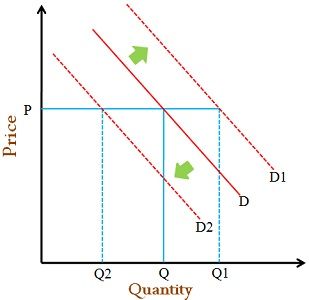 Quantity Demanded refers to how much of an economic good or service is demanded by a consumer or a group of consumers at a given period at a certain price. There are two important points related to quantity demanded which are, 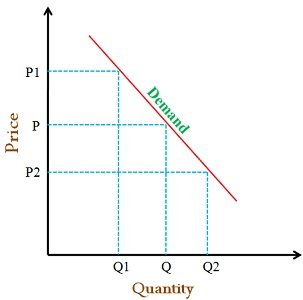 The following points are noteworthy so far as the difference between demand and quantity demanded is concerned:

Demand is inversely related to price, i.e. with the increase in price, the demand for the product or service decreases whereas a decline in the price of the product or service may cause a rise in its demand. Further, it can be represented by a curve that shows the relationship between price and quantity demanded. On the other hand, quantity demanded is a particular point on the demand curve.