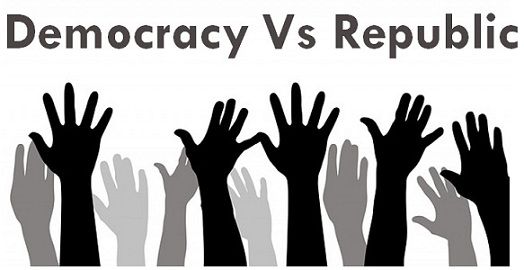 There are many forms of political systems which are prevalent in different countries of the world for a long time like monarchy, oligarchy, anarchy, democracy and republic. Of these forms of government, democracy and a republic are quite often juxtaposed, but there is a fine line amidst the two. Democracy refers to the system of masses, i.e. a political system dominated by citizens of the country. Under this system, the general public possess a certain degree of power and authority and takes part in the decision making process of the state.

Republic refers to the state wherein the ultimate power lies in the hands of the people and their elected represetatives. Here, the representatives are chosen by the people to vote on behalf of them.

This article excerpt sheds light on the differences between democracy and republic, take a read.

The word democracy is a combination of two Greek words ‘demos’  means people and ‘kratein’ means, to rule. In short, it means ‘the rule of people’. It is the government which is ruled by the citizens of the country, also known as the system of masses. Majority rule is the essence of this system.

In the democracy, there is active participation of the general public in the political and decision-making process of the state. Free and fair elections are held to choose and replace the government. People get equal rights in a democracy, and the law applies to all the citizens of the country in an equal manner.

The term republic is a Latin origin, made of two words ‘res’ means a thing and ‘publica’ means public, that refers to ‘ the public thing i.e. law’. It is considered as the standard form of government, which is ruled by the citizen’s representative chosen by them through voting. The government leaders can exercise their powers as per the rule of law.

The Republic is the representative democracy where there is an elected chief of the state, who serves the state for a certain period, known as the President. In this political system, the government cannot take away the inalienable rights of the individual. In other words, the right of an individual cannot be overridden by the masses.

Key Differences Between Democracy and Republic

The major differences between democracy and republic are provided in the points given below:

As we have discussed above, both the systems have their positive and negative aspects. Democracy gives equal rights to all the citizens of the country. As opposed to, a republic where all the citizens get the right to vote to select their representative.

Difference Between Nationality and Citizenship

Difference Between e-Government and e-Governance