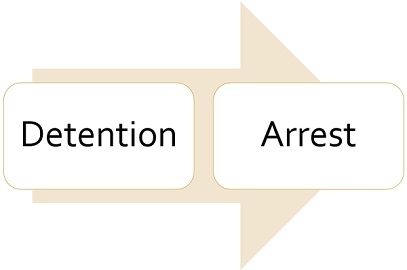 We hear the term ‘arrest’ every now and then, due to the increasing crime in society. The primary difference between detention and arrest lies in the fact that whether the accused/suspected is charged with a crime or not. This is because when the person is just detained, he/she is held in police custody, based on reasonable suspicion, so as to question him/her.

However, when the person is arrested, he/she is charged with a crime and needs to be presented before the court in 24 hours. In general, the primary reason for someone’s arrest is that the person has done something which is against law and order.

This post will make you understand the basic difference between detention and arrest.

Detention is a temporary custody period before the trial or hearing, followed by arrest or the decision of the judge or any other legal authority.

Detention of a person takes place when the officer in charge believes that he/she has broken some law, but does not have sufficient proof or evidence to warrant arrest. Hence, it is based on suspicion that the detainee is personally involved in criminal activity and it should be in accordance with the law.

Further, it does not mean a legal arrest, rather it is simply withholding, restraining or interrogating someone, in connection with the alleged offence.

Also, it can only be practised in the public interest in relation to the prevention of a crime and maintaining law and order in society.

Additionally, on the basis of the seriousness of the offence, the police can keep a person in custody for 24 hours, but further detention needs to be authorized by the judiciary.

The person who is detained, i.e. who is deprived of personal liberty and not convicted of the crime, is known as a detainee.

Arrest implies the apprehension of someone, by the police for alleged commission of a crime, which results in deprivation of his/her liberty in accordance with the law. So, the arrester controls the liberty of the arrested person.

Further, the arrested person can be released on bail, only when the offence is bailable.

Important: When the police arrest a person, the grounds of arrest must be told to him/her.

Policeman undertaking the arrest is required to prepare a ‘Memo of Arrest‘ which states the date and time of arrest and is duly signed by the arrested person along with any of his relative or friend or any person from the locality who is respectable.

It must be noted that:

The arrest of a person takes place when probable cause has been found out against the suspect by the police. Officers may also seek permission to investigate and search or they must possess a warrant to do the same.

Key Differences Between Detention and Arrest

So far we have developed an understanding of the meaning of the two terms, now we are going to talk about the difference between detention and arrest:

In general, to make an arrest the police officer is required to show a warrant. Come let us first understand its meaning.

What is a Warrant?

A warrant is a legal document, signed by the magistrate, which is to be brought and shown by the police officer, to the person before making an arrest.

However, there are eight different types of cases in which a person can be arrested even without a warrant. These are:

In a nutshell, to hold someone for detention, only reasonable suspicion is required by the police, whereas to legally arrest someone, the police officers must have probable cause.