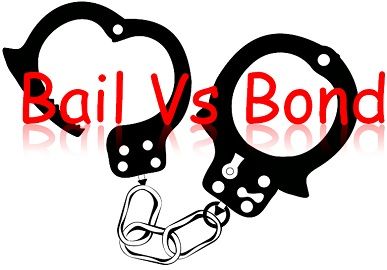 On the event of arrest and imprisonment of an accused of a criminal offence, the accused must be presented before the judge who gives his/her verdict concerning the accused’s bail order. The term bail can be described as a provisional release of the accused charged with a crime awaiting trial, by the deposit of security.

As against, the bond refers to the type of agreement in which a third party, i.e. bond agent or bondsman enter into an agreement, to be responsible for the debt and obligation of the person under indictment. The two terms are more or less related to one another. However, there exists a fine line of difference between bail and bond which is explained in this article in a detailed manner.

By the term bail, we mean the release of the litigant, from police custody and entrusting him/her to the private custody of the person, who guarantees the department to produce the litigant, to answer the charge, whenever required. It is a court’s approval that allows the accused to be out of jail, on the deposit of necessary amount and compliance to the necessary conditions.

In finer terms, bail is an agreement, wherein the person under indictment makes a written assurance to the legal authority, that he/she will appear to the court until the proceedings are finished with respect to the case and will adhere to the terms and conditions set out in the agreement.

Further, a specified sum has to be deposited for availing bail, as security, which is refunded to the person, if he complies with the conditions carefully and the same will be forfeited if the person defaults in the fulfilment of the conditions specified in the agreement without reasonable cause.

An anticipatory bail is one granted by the Session Court or High Court, to an accused who perceives arrest for the commission of the nonbailable offence, but is not yet arrested by the police officers.

Bond can be understood as a formal written agreement, duly signed by the defendant and surety to make good to pay the definite sum, if the defendant fails to appear the court for a specified criminal proceeding, at the stipulated date and time. It is a mechanism used to avail the release of the accused, waiting for the trial upon the criminal charges, from the police custody.

Bond is actually the commitment of the bonds person to fulfil the debt if the accused defaults in appearing before the court. The defendant pays 10% interest on the value of the bond, to the bondsman, along with the collateral.

Key Differences Between Bail and Bond

The difference between bail and bond can be drawn clearly on the following grounds:

The basic objective of arrest and detention of the accused is to ensure that his appearance to the court, whenever he is called for trial. If that accused confesses the crime and is sentenced to imprisonment, then he must be present for the same.

However, if the person under indictment can appear before the court, without being imprisoned, then it seems unfair to keep him in police custody until it is proved that the crime is committed by him only. Bail and bond are two such alternatives available to the defendant. While cash bonds are termed as bail, the surety bond is termed as bond.