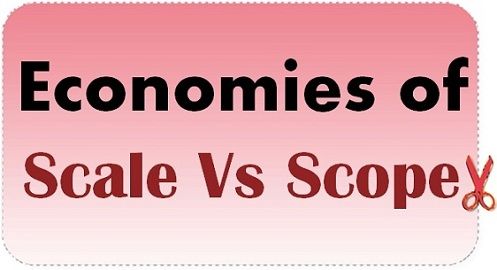 On the other hand, economies of scope refer to the benefits obtained due to producing multiple products using the same operations efficiently. Economies of scope, is nothing but the savings in cost received by producing two or more distinct goods, when the cost of production so, relatively less than producing it separately.

People get confused between these two techniques easily as they both results in a proportionate saving in cost of production. But, there is a difference between economies of scale and economies of scope, which has been discussed in this article in detail. Have a look.


Definition of Economies of Scale

Therefore, with the rise in the scale of operation, the fixed cost is distributed evenly over the quantity produced. So with every additional unit produced, the average cost of production tends to decline. Along with that, variable cost per unit also decreases, due to operational efficiency and synergy. In this way, the enterprise gains cost effectiveness. There can be internal and external economies of scale.

Definition of Economies of Scope

Economies of Scope refers to the reduction in the average cost per unit, by increasing the variety of products produced. In this technique, the total cost of producing two products (related or unrelated) is less than the cost of producing each item individually.

Economies of Scope focuses on better utilisation of the firm’s resources and common assets. In this way, the utilisation of assets is spread over two or more products, i.e. shared by multiple products to decrease the overall cost of production. As the costs are spread over several products which lead to the decrease in the average cost per unit of each product.

In this era of competition, it is very important for the firms to cut down their excess costs, to offer their products at low prices and expand their share in the market. Both economies of scale and economies of scope result in the savings in cost, but their concept is different, whereby one lowers the cost by increasing the volume of output and the other by increasing the number of products it offers.

Difference Between Internal and External Economies of Scale

Difference Between Joint Product and By-Product