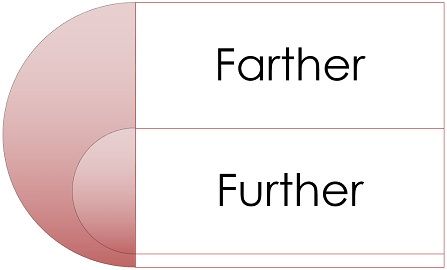 The word farther is an adverb form of far, which is used to express the distance between two entities or objects by comparing them. Farther is often contrasted with the word further when we talk of spatial distance. Further, is commonly used to denote distance in a non-literal sense, i.e. when it is only imaginable but not measurable. It may also mean, additional or more. Let’s take a look at the example given below to understand them better:

These two words can be used interchangeably and synonymously in sentences which confuses people easily, but there exists a fine line of difference between farther and further, which you can understand with this article.

Farther is a comparative form of the adverb ‘far’, which implies to, or at a considerable distance. It is used to express the degree to which an object is away from another object, in actual units of measurement. It may also be used for talking about figurative distance. Let us now discuss the usage of the word ‘farther’:

Further is an abstract concept which is used in sentences to express imaginative distance, to talk about the extent to which one thing is far away from the another. In short, when there is no idea of the distance, both in terms of units and time, we use ‘further’.

Further, is primarily used in metaphorical situations. It can also be used to mean moreover, or in addition to. Now, let’s look at the applications of ‘further’:

Key Differences Between Farther and Further

The difference between farther and further can be drawn clearly on the following grounds:

Nowadays, the word further is more commonly used than the farther. One simple trick to use the words farther and further is that when you can actually measure or know the distance amidst two entities, use farther, or otherwise you can use further. In other words, when the actual distance is not mentioned or is implied, you can use further. It can also be used to indicate additional or moreover.