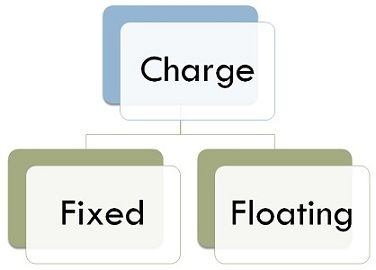 Charge refers to the collateral, given for securing the debt, by way of mortgage on the company’s assets. There are two kinds of charge, fixed charge, and floating charge. The former is a charge on the real asset of the company that is identifiable and ascertained when the charge is created. Conversely, the latter is slightly different, which is created over the the assets circulatory in nature, i.e. the charge is not attached to any definite property.

Companies borrow funds from banks, financial institutions and other companies in the form of loans to fulfill their monetary requiements. The moneylender demands security against the loan and so, the borrower creates a charge over the assets or lien on the property. In this context fixed charge and floating charge are often discussed. Before understanding creation of charge, one should know the difference between two types of charge.

Fixed Charge is defined as a lien or mortgage created over specific and identifiable fixed assets like land & building, plant & machinery, intangibles i.e. trademark, goodwill, copyright, patent and so on against the loan. The charge covers all those assets that are not sold by the company normally. It is created to secure the repayment of the debt.

In this type of arrangement, the unique feature is that after the creation of charge the lender has full control over the collateral asset and the company (borrower) is left over with the possession of the asset. Therefore, if the company wants to sell, transfer or dispose off the asset, then either previous approval of the lender is to be taken, or it has to discharge all the dues first.

The lien or mortgage which is not particular to any asset of the company is known as Floating Charge. The charge is dynamic in nature in which the quantity and value of asset changes periodically. It is used as a mechanism to secure the repayment of a loan. It covers the assets like stock, debtors, vehicles not covered under fixed charge and so on.

In this type of arrangement the company (borrower) has the right to sell, transfer or dispose off the asset, in the ordinary course of business. Hence, no prior permission of the lender is required and also there is no obligation to pay off the dues first.

The conversion of floating charge into fixed charge is known as crystallization, as a result of it, the security is no more floating security. It occurs when:

The following are the major differences between fixed charge and floating charge:

Fixed Charge is created on fixed asset, no matter if they are tangible or intangible. Unlike Floating Charge, which covers the current assets of the company, which varies from time to time. Moreover, when the borrower defaults in the payment of outstanding debt, the floating charge becomes fixed charge.