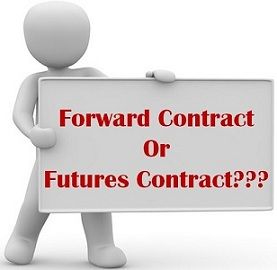 A forward contract is a contract whose terms are tailor-made i.e. negotiated between buyer and seller. It is a contract in which two parties trade in the underlying asset at an agreed price at a certain time in future. It is not exactly same as a futures contract, which is a standardized form of the forward contract. A futures contract is an agreement between parties to buy or sell the underlying financial asset at a specified rate and time in future.

As in both the two types of contract the delivery of the asset takes place at a predetermined time in future, these are commonly misconstrued by the people. But if you dig a bit deeper, you will find that these two contracts differ in many grounds. So, here in this article, we are providing you all the necessary differences between forward and futures contract so that you can have a better understanding about these two.

A forward contract is a private agreement between the buyer and seller to exchange the underlying asset for cash at a particular date in the future and at a certain price. On the settlement date, the contract is settled by physical delivery of asset in consideration for cash. Settlement date, quality, quantity, rate and the asset are fixed in the forward contract. Such contracts are traded in a decentralized market, i.e. Over the counter (OTC) where the terms of the contract can be customized as per the needs of the parties concerned.

The buyer in a forward contract is considered as long, and his position is assumed as long position while the seller is called short, holds a short position. When the price of the underlying asset rises and is more than the agreed price, the buyer makes a profit. But if the prices fall, and is less than the contracted price the seller makes a profit.

A binding contract which is executed at a later date is a future contract. It is an exchange-traded contract of the standardized nature where two parties, decides to exchange an asset, at an agreed price and future specified a date for delivery and payment. A future contract is a standardized in terms of the quantity, date, and delivery of the item. The buyer holds long position while the seller holds a short position in this contract.

As the contracts are traded in the official exchange, which acts as both mediator and facilitator between the buyer and seller. The exchange has made it mandatory for both the parties to pay an upfront cost as a margin.

The unique feature of the future contract is marking to a market where the prices are subject to fluctuations. Hence, the differences in the price of contracts are settled daily. Further, the futures are divided into two broad categories, which are:

The basic differences between forward and futures contract are mentioned below:

As per the above discussion, it can be said that there are several dissimilarities between these two contracts. The credit risk in a forward contract is relatively higher that in a futures contract. Forward contracts can be used for both hedging and speculation, but as the contract is tailor made, it is best for hedging. Conversely, futures contracts are appropriate for speculation.

Difference Between Options and Warrants

Difference Between Call and Put Option

Difference Between Futures and Options