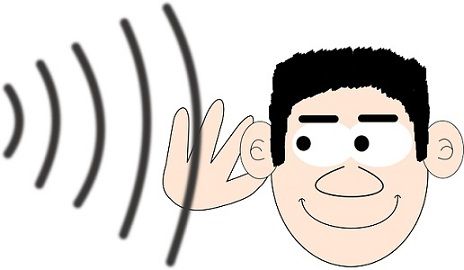 Someone rightly said, “Hearing is through ears, but listening is through the mind.” The two activities hearing and listening involve the use of ears, but they are different. The hearing is nothing but a sense that helps you receive sound waves and noise by ears. It is the power of perceiving sounds.

On the contrary, listening is when you receive the sound waves and understand it by paying full attention to the words and sentences of the speaker. It is one’s ability to correctly receive and interpret the message transferred by the other party in the process of communication.

For many people, these two activities are one, but the truth is, the difference between hearing and listening is vital. so have a glance at this article to understand the terms completely.

The natural ability or an inborn trait that allows us to recognize sound through ears by catching vibrations is called the hearing. In simple terms, it is one of the five senses; that makes us aware of the sound. It is an involuntary process, whereby a person receives sound vibrations, continuously.

A normal human being’s hearing capability ranges from 20 to 20000 Hertz, called as audio or sonic. Any frequency above and below the given range is known as ultrasonic and infrasonic respectively.

Listening is defined as the learned skill, in which we can receive sounds through ears, and transform them into meaningful messages. To put simply, it is the process of diligently hearing and interpreting the meaning of words and sentences spoken by the speaker, during the conversation.

Listening is a bit difficult, because it requires concentration and attention, and the human mind is easily distracted. People use it as a technique to comprehend, what is being said, through different verbal and non-verbal signs, i.e. how it is being said? What type of words is used? Tone and pitch of voice, body language and so on.

Active listening is the key element; that makes the communication process effective. Further, it encompasses making sounds that show listener’s attentiveness and providing feedback. It had a greater influence in our lives and used to gain information, learn and understand things and so on.

Key Differences Between Hearing and Listening

So, with the discussion, it is quite clear that listening is one step ahead of the hearing. The hearing is simply the ability to hear, i.e. natural or God-given however, listening is an acquired skill, which only a few people possess. While the hearing is involuntary and performed effortlessly, listening is done intentionally, wherein we are selective and pay attention to only those messages, we think important for us.