Conversely, Vertical Integration is used to rule over the entire industry by covering the supply chain. It implies the integration of various entities engaged in different stages of the distribution chain.

So, take a read of the given article to get a better understanding of the differences between Horizontal and Vertical Integration.

The merger of two or more firms, which are engaged in the same line of business and their activity level is also same; then this is known as Horizontal Integration. The product may include complementary product, by-product or any other related product, competitive product or entering into the product’s repairs, services, and maintenance section.

Horizontal Integration reduces competition between firms in the market, as if the producers of the product get combined they can create a monopoly. However, it can also create an oligopoly if there are still some independent manufacturers in the market.

It is a tactic used by most of the companies to expand its size and achieve economies of scale due to increased production level. This will help the company to approach new customers and market. Moreover, the company can also diversify its products and services.

One of the examples of horizontal integration is the acquisition of Instagram by Facebook and Burger King by McDonald’s.

Vertical Integration is between two firms that are carrying on business for the same product but at different levels of the production process. The firm opts to continue the business, on the same product line as it was done before integration. It is an expansion strategy used to gain control over the entire industry.

There are two forms of vertical integration, as described below: 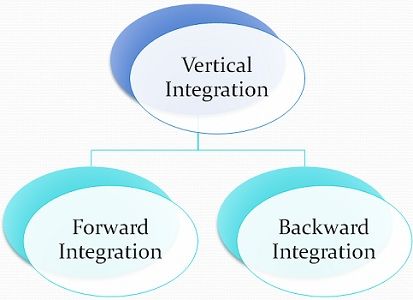 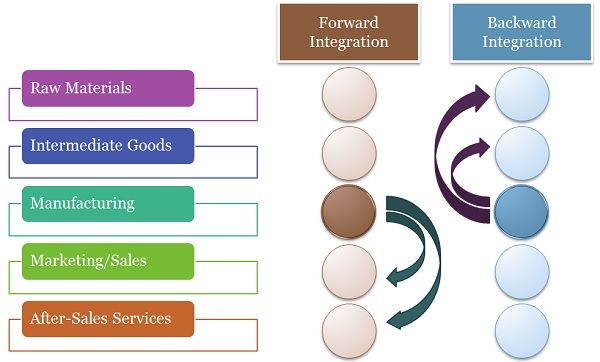 The cause of integration is to strengthen the production-distribution chain and to minimize the cost and wastage of products at various levels. The integration also enables the company to keep upstream and downstream profits and eliminate intermediaries.

Apple is the best example of vertical integration; it is the biggest and a renowned manufacturer of smartphones, laptops and so on. It controls the whole production and distribution process itself, from the beginning to the end. Another example of this is Alibaba, a Chinese e-commerce company, that owns the entire system of payment, delivery, search engine and much more.

The following are the major differences between horizontal and vertical integration: 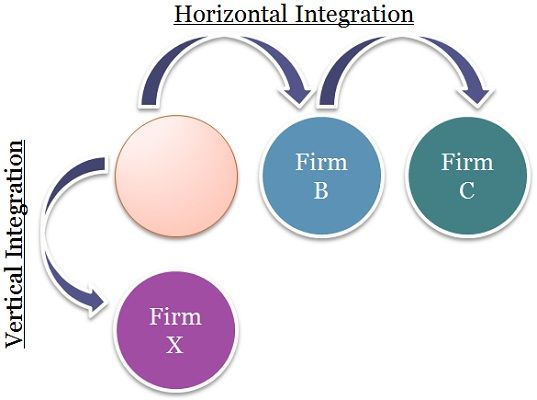 Integration of Exxon and Mobil, oil companies to increase market dominance is an example of Horizontal Integration.

Firms like Mafatlal, National Textile Corporation, etc have opened up retails stores owned by them, in order to have an effective control over distribution activities.

Integration strategy is used by the firms to increase market share, become more diversified, eliminating the cost of developing new product and introducing it to the market, minimizing competition by taking over competitor’s business, etc.

Difference Between Horizontal and Vertical Analysis