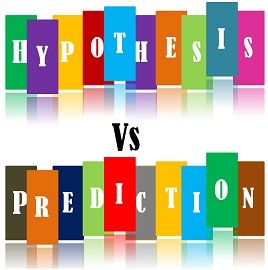 The hypothesis is the fundamental instrument in conducting research. It proposes new experiments and observations and indeed most of the experiments are undertaken, with the sole aim of testing the hypothesis. It is a propounded explanation for the happening of a particular phenomenon, whose development is based on specific evidence.

Due to insufficient knowledge, many misconstrue hypothesis for prediction, which is wrong, as these two are entirely different. Prediction is forecasting of future events, which is sometimes based on evidence or sometimes, on a person’s instinct or gut feeling. So take a glance at the article presented below, which elaborates the difference between hypothesis and prediction.

A prediction is described as a statement which forecasts a future event, which may or may not be based on knowledge and experience, i.e. it can be a pure guess based on the instinct of a person. It is termed as an informed guess, when the prediction comes out from a person having ample subject knowledge and uses accurate data and logical reasoning, to make it.

Regression analysis is one of the statistical technique, which is used for making the prediction.

In many multinational corporations, futurists (predictors) are paid a good amount for making prediction relating to the possible events, opportunities, threats or risks. And to do so, the futurists, study all past and current events, to forecast future occurrences. Further, it has a great role to play in statistics also, to draw inferences about a population parameter.

Key Differences Between Hypothesis and Prediction

The difference between hypothesis and prediction can be drawn clearly on the following grounds:

To sum up, the prediction is merely a conjecture to discern future, while a hypothesis is a proposition put forward for the explanation. The former, can be made by any person, no matter he/she has knowledge in the particular field. On the flip side, the hypothesis is made by the researcher to discover the answer to a certain question. Further, the hypothesis has to pass to various test, to become a theory.

Difference Between Forecasting and Planning

Difference Between Observation and Inference