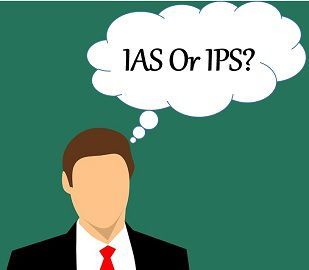 IAS and IPS are the two most challenging jobs in India, which not only gives power and position but has certain duties towards the nation and responsibility towards society. Indian Administrative Service (IAS) is regarded as the top-ranking civil service job offered to those candidates who top the Civil Service Examination.

Next, best alternative after IAS is the Indian Police Service (IPS) which is also a dream job of many Indian citizens, but it is a technical job, which requires maintaining peace and order in the state and direct interaction with anti-social elements.

The article excerpt will help you in understanding the difference between IAS and IPS.

IAS stands for Indian Administrative Service, earlier called as Imperial Civil Service, is the bureaucratic wing of All India Services. A person can become IAS, by not only qualifying the Civil Services Examination but also getting a top rank in it. The examination is conducted every year by Union Public Service Commission (UPSC).

When a candidate qualifies IAS exams, he/she is appointed as a sub-divisional magistrate, for the probationary period. After the completion of that period, the officer is promoted as District Magistrate and Collector for a few years, after which the officer will take charge as Divisional Commissioner, who is the head of the entire State division. An IAS officer may also be posted at apex level in the Central Government as Joint Secretary, Additional Secretary, Secretary and Cabinet Secretary.

The primary duties of an IAS officer are the formulation of policies and their implementation, public administration, secretarial governance and so forth. An IAS officer is responsible for the collection of revenue and also working like Courts to settle matters related to revenue. He/she is also responsible for implementation fo the policies formulated by the Centre and the state.

Indian Police Service or IPS, formerly known as Indian Imperial Police, is the top-ranked officer of the Police Department. An IPS officer is Civil Services qualified aspirant who serves the nation by leading the police force both at the State and Central level.

The basic duties of an IPS officer include law enforcement, public order, crime investigation and security intelligence. The Ministry of Home Affairs (MHS) looks after its Cadre management as well as the policy decisions regarding the cadre structure, hiring, appointment, deputation, salary, allowances and perquisites, etc.

Key Differences Between IAS and IPS

The difference between IAS and IPS can be drawn clearly on the following grounds:

The eligibility criteria is same for both the positions, i.e. the candidate must be a citizen of India, graduated from a recognized university and should have attained the age of 21 years.

By and large, both the posts are very inspiring in nature, as the two encourages you to serve your nation. Every year lakhs of students appear for UPSC exam and study 24×7 in order to become an IAS or IPS officer. These titles not only hold power and authority, but also gives recognition and respect in the society.

Difference Between CID and CBI