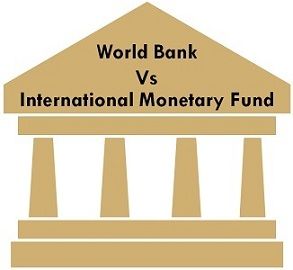 The process of globalization is facilitated by three major organizations, i.e. World Bank, World Trade Organization (WTO) and International Monetary Fund (IMF). There is a little bit of bewilderment and confusion, in the mind of many people regarding the IMF and World Bank regarding their functions, objectives, structure, member nations, etc. The fundamental difference between IMF and World Bank is that the bank is established as a development organization whereas the fund is founded as a cooperative organization.

World Bank provides financial and technical aid to the developing nations of the world. On the other hand, IMF is formed to promote financial stability, international trade, high employment, reduce poverty and so on. Here, in this article we have explained the difference between world bank and IMF, take a read.

The International Monetary Fund is a Bretton Woods Institution, founded in the year 1944, based in Washington, D.C., USA. The IMF is an autonomous body which began its operations in 1947. At its inception, the member countries were only 31 which has been exceeded to 188 countries. The fund is a unitary organisation, affiliated with the United Nation Organization (UNO). The IMF provides concessional and non-concessional lending to its member nations.

The main function of the IMF is to look after the international monetary system, bring financial stability, encourage world trade, reduce poverty, generate employment and stimulate sustainable growth of the economy. In 2012, the area of operation of the IMF was extended and now, it oversees all the matters relating to macroeconomics and finance.

The member nations contribute finance to the fund, in a fixed quota which is decided according to their national income and international trade. The quota is taken as a base to determine the borrowing rights and voting power of the country.

World Bank is a global organization, working to provide loans to developing nations and to eliminate poverty. It was formed at the Bretton Woods Conference held in Washington, D.C., USA, in 1944. It is an international financial institution which started as a single organization, but now it is a group of five organizations namely:

The following are the major differences between IMF and World Bank:

The IMF and World Bank are the two Bretton Woods Institution, formed in 1944. There are many things in common, in these two international organizations. Both of them supports the international monetary and economic system. Almost all the countries of the world are the members of these two organizations.