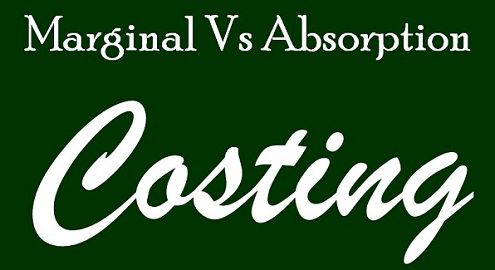 Marginal Costing, also known as Variable Costing, is a costing method whereby decisions can be taken regarding the ascertainment of total cost or the determination of fixed and variable cost to find out the best process and product for production, etc.

It identifies the Marginal Cost of production and shows its impact on profit for the change in the output units. Marginal cost refers to the movement in the total cost, due to the production of an additional unit of output.

In marginal costing, all the variable costs are regarded as product related costs while fixed costs are assumed as period costs. Therefore, fixed cost of production is posted to the Profit & Loss Account. Moreover, fixed cost is also not given relevance while determining the selling price of the product or at the time of valuation of closing stock (whether it is finished goods or Work in  Progress).

In an absorption costing system, both the fixed and variable costs are regarded as product related cost. In this method, the objective of the assignment of the total cost to cost centre is to recover it from the selling price of the product.

On the basis of function, the expenses are divided into Production, Administration and Selling & Distribution. The following are the types of Absorption Costing:

The following are the major differences between marginal costing and absorption costing.

You can see the differences in the profits generated in the income statement by the two costing system because the absorption costing procedure, apportions fixed cost of production to the output whereas the marginal costing system ignores it. Moreover, the absorption costing is based on budgeted levels of output, but because fixed overheads remain same irrespective of the levels of output, it creates variances in the actual and the budgeted levels at the time of its recovery.

Difference Between Costing and Cost Accounting