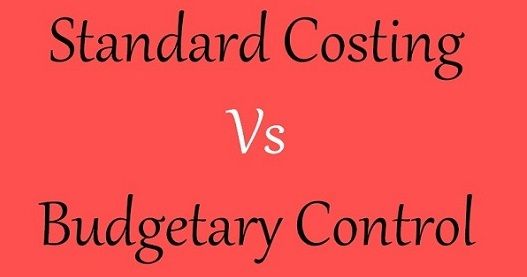 Both Standard Costing and Budgetary Control are based on the principle that costs can be controlled along certain lines of supervision and responsibility, that focuses on controlling cost by comparing actual performance with the predefined parameter. However, the two systems are neither similar nor interdependent. Standard Costing delineates the variances between actual cost and the standard cost, along with the reasons.

On the contrary, Budgetary Control, as the name suggest, refers to the creation of budgets, then comparing the actual output with the budgeted one and taking corrective action immediately.

The two systems aim at measuring performance by fixing targets. Nevertheless, The former, forecasts, cost accounts but the later projects detail about financial accounts. Similarly, there are many differences between Standard Costing and Budgetary Control, which has been discussed below.

The following steps are taken, in the process of Standard Costing:

Standard Costing is a tool for ascertaining and controlling the costs. With this technique, the organization can make best possible use of the resources. In addition to this, the management can keep a check on the organizational activities by assessing the deviations, i.e. analyzing the difference between actual performance and the standard performance.

By Budgetary Control we mean, a management function in which an organization’s activities are directed and regulated in such a way reach the desired objectives. It is a control technique, in which the operations are planned in advance, and then they are compared with the actual results to know whether the expected results are achieved or not. The following are the major characteristics of this system:

Here, budget refers to a written financial statement expressed in monetary terms prepared in advance for future periods, containing the details about the economic activities of the business organization.

The Budgetary Control system facilitates the management to fix the responsibilities and coordinate the activities to achieve the desired results. It helps the management to measure the performance of the organization as a whole. Moreover, it helps in the formulation of future policies by reviewing current trends.

The following are the major differences between standard costing and budgetary control:

Both Standard Costing and Budgetary Control are the techniques which provide a yardstick to judge the performance and analyze disagreement of the actual and estimated figures. Budgetary Control makes side by side comparisons, and that is why periodic revisions are made in the budgets, and that is why there is no need for reporting the variances, which is absent in Standard costing.