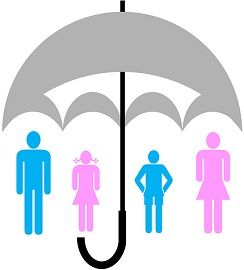 The term life insurance implies the type of insurance, that covers the risk of life and provides a guarantee to compensate by paying the specified sum, either on the death of the insured or after the specified period.

In life insurance, the amount is payable on the happening of the uncertain event. Moreover, there are certain plans, wherein the payment of the policy amount is made at the maturity. These are long term contracts which require the payment of premium throughout its life till it matures and the sum assured is paid on maturity. It can be surrendered, after some years, wherein the policyholder will get a proportion of premiums paid, called as surrender value.

There are three types of life insurance, discussed as under:

General insurance or otherwise known as non-life insurance or property and casualty insurance, is a contract that covers any risk apart from the risk of life. The insurance is to safeguard us and our property, such as home, car, and other valuables from fire, theft, flood, storm, accident, earthquake and so on.

These are the contract of indemnity, wherein the insurer promises to make good, the loss occurred to the insured. So, irrespective of the amount of policy, the insurance company will reimburse the loss suffered by the insured. They are short term in nature, generally one year and so renewal is required every year. The types of general insurance are:

The difference between life insurance and general insurance can be drawn clearly on the following grounds:

In life insurance, the actuaries estimate the liability under the current policy at regular intervals. On the other hand, in general insurance, a part of the premium is taken forward to make provision of the unexpired liability and the remaining amount i.e. the net of claims and expenses is taken as the profit of loss.

Difference Between Nomination and Assignment