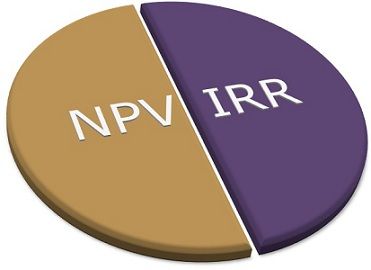 NPV or otherwise known as Net Present Value method, reckons the present value of the flow of cash, of an investment project, that uses the cost of capital as a discounting rate. On the other hand, IRR, i.e. internal rate of return is a rate of interest which matches present value of future cash flows with the initial capital outflow.

In the lifespan of every company, there comes a situation of a dilemma, where it has to make a choice between different projects. NPV and IRR are the two most common parameters used by the companies to decide, which investment proposal is best. However, in a certain project, both the two criterion give contradictory results, i.e. one project is acceptable if we consider the NPV method, but at the same time, IRR method favors another project.

The reasons of conflict amidst the two are due to the variance in the inflows, outflows, and life of the project. Go through this article to understand the differences between NPV and IRR.

When the present value of the all the future cash flows generated from a project is added together (whether they are positive or negative) the result obtained will be the Net Present Value or NPV. The concept is having great importance in the field of finance and investment for taking important decisions relating to cash flows generating over multiple years. NPV constitutes shareholder’s wealth maximization which is the main purpose of the Financial Management.

NPV shows the actual benefit received over and above from the investment made in the particular project for the time and risk. Here, one rule of thumb is followed, accept the project with positive NPV and reject the project with negative NPV. However, if the NPV is zero, then that will be a situation of indifference i.e. the total cost and profits of either option will be equal. The calculation of NPV can be done in the following way:

In this method, the cash inflows and outflows are given. The calculation of the discount rate, i.e. IRR, is to be made by trial and error method.

The decision rule related to the IRR criterion is: Accept the project in which the IRR is greater than the required rate of return (cut off rate) because in that case, the project will reap the surplus over and above the cut-off rate will be obtained. Reject the project in which the cut-off rate is greater than IRR, as the project, will incur losses. Moreover, if the IRR and Cut off rate are equal, then this will be a point of indifference for the company. So, it is at the discretion of the company, to accept or reject the investment proposal.

Key Differences Between NPV and IRR

The basic differences between NPV and IRR are presented below:

Net Present Value and Internal Rate of Return both are the methods of discounted cash flows, in this way we can say that both considers the time value of money. Similarly, the two methods, considers all cash flows over the life of the project.

During the computation of Net Present Value, the discount rate is assumed to be known, and it remains constant. But, while calculating IRR, the NPV  fixed at ‘0’ and the rate which fulfills such a condition is known as IRR.

Difference Between IRR and MIRR

Difference Between Ordinary Annuity and Annuity Due

Difference Between Annuity and Perpetuity