The term ‘percentage‘ is widely used to express anything, from changes in the tax rates, to the rate of unemployment, to the number of people using smartphones, to resource allocation by the government, to the change in price or quantity of a product or results of an examination. It is a form of writing any digit with denominator 100.

The terms ‘percentage’ and ‘percentile’ often confuse us, especially to the students appearing in different examinations. For a given dataset, percentile represents that value in the distribution or level, at or below which, a certain percentage of score lies.

In this post, you will come to know exactly what differentiates the two.

Hence, we can use the given rule to convert a number stated in percentage terms, into fraction or decimal: 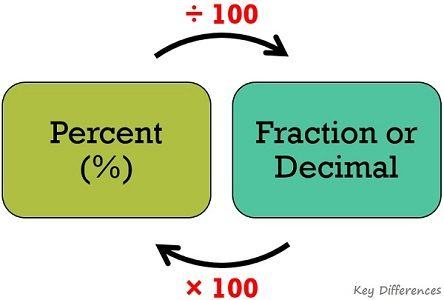 To convert a fraction into a percentage, all you need to do is divide the numerator by the denominator and multiply the result by 100.

The percentage can also be used to compare ratios by representing them as percentages.
For example:

In statistics, percentile refers to the point on a measurement scale, at or below which a specified percentage of the cases lies. The percentile rank of a score, implies the proportion of scores in a frequency distribution, that the marks obtained are more than or equal to. It reflects how a score compared to other scores in the given dataset.

Alternatively, it can also refer to the values which divide the dataset into 100 equal parts.

Key Differences Between Percentage and Percentile

The difference between percentage and percentile can be drawn clearly on the following grounds:

Now, we will understand percentile, using the same example.

This means that 81.25 scored marks lower than Arya.

The percentage is mainly used for reporting information and also to show comparison, as the base number is always 100. On the other hand, we use percentile to know the relative standing of a value, and so it is mainly employed in the ranking system.

Difference Between Formative and Summative Assessment

Difference Between M.Phil. and Ph.D.