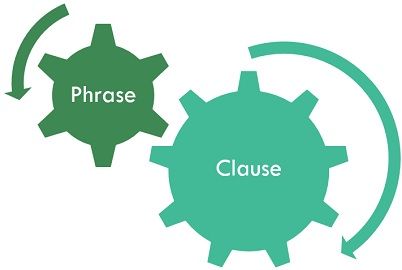 In English, there are two grammatical terms, that forms part of a sentence which may or may not be meaningful. These are phrase and clause, wherein the phrase implies a set of words, that acts as a single unit but does not have a subject and predicate.

On the contrary, a clause is also a group of words, which contains a subject and a predicate. Now, let’s have a look at the examples given below, to understand the difference between phrase and clause in a better way:

In the first sentence, in Gujarat is just a phrase, as it does not have a subject-verb pairing, while she lives in Gujarat is a clause, as it contains both subject and verb. In the next sentence, I went to my home, is a clause because it has a subject and a verb, whereas to my home and from the party, are the phrases, as it is just a group of words, not making any sense.

A phrase refers to a combination of two or more words, that are related to one another and acts as a single unit, but does not contain a subject-verb pairing. It forms a part of a clause or sentence which is used to provide further information.

A phrase does not carry any meaning of its own, due to the absence of subject and verb, but it clarifies the context, of the sentence when added to a clause. There are six types of clauses:

In the above examples, you might have observed, there are nouns and verbs too, but in no case, the nouns act as the subject of the sentence, doing a predicate verb.

When in a set of words, there is a subject actively performing an action (verb), then that combination of words, is called as a clause. A clause can function as a sentence, which may or may not be a complete one.

There are two parts in a clause, i.e. a subject and a predicate. The predicate expresses something with respect to the subject. There are various types of clauses which are given as under:

Key Differences Between Phrase and Clause

The points given below are substantial so far as the difference between phrase and cause is concerned:

You can easily find out, which set of words is a phrase or clause, by dividing them into various parts of speech. If the combination of words contains a subject and a verb, then it is regarded as a clause, otherwise, it is called as a phrase.

Difference Between That and Which