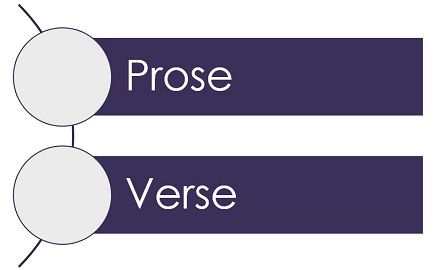 Do you guys know that we use prose, in our normal day to day speech, writing and thinking? It is a style in which we naturally communicate and follows the grammatical structure. The prose is a common term used for unmetrical writing.

On the other hand, a Verse is used for metrical writing, no matter if the writing is poetic or unpoetic. A verse uses a rhythmic structure, which is not used in ordinary speech. In this session, we will learn the differences between prose and verse.

What is a Meter?

In a poetic composition, meter refers to an organized unit of rhythm, which is also called as the foot. It is the typical pattern of syllables, which establishes a rhythm.

Rhythm is the patterned flow of words and phrases, in literary composition, often ascertained by long or short, stressed or unstressed syllables.

The prose is a type of literary genre, having a simple and loosely defined structure, often found in day to day speech and communication.

In simple words, it is a written or spoken language in its ordinary form, without any formal metrical structure

In prose, a natural flow of speech and fundamental grammatical rules are followed. This means that it contains sentences and paragraphs which are grammatically correct. Further, prose uses everyday language which is clear and straightforward and avoids the aesthetical approach. In prose, the thought flows across the sentences.

It is a general form of writing which is used in both fictional and non-fictional work of literature. Examples of prose include novels, encyclopedias, textbooks, articles, casual dialogues, dictionary definition, etc.

There are four basic types of prose, given as under:

A poem may contain several verses. It is a series of lyrics which explain the essence of the poem, as well as it keeps the thought going. It requires an arrangement of words in a definite pattern, so as to produce a harmonious rhythm.

The verse can be of two types – free verse and blank verse, which are discussed as under:

Key Differences Between Prose and Verse

The difference between prose and verse is discussed in the points below:

To sum up, the verse refers to the single line of the poem, or any combination of words in a poem. But the prose is a large piece of writing, not having a consistent rhythm.

The prose is meant to imitate natural speech and communication. But, verses stress on producing musical rhythm and cadence.

Difference Between Syntax and Grammar

Difference Between Literature and Language

Difference Between Simile and Metaphor