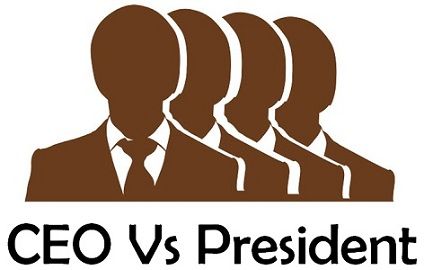 The basic difference between President and CEO is that President looks after the internal business operations, the CEO focuses on making a link between internal and external organization.

In the corporate world, it is not the products, strategies or advertising, who leads the company in the path of success, rather it is the manpower which makes efforts continuously and strives for organization’s progress. Chief Executive Officer (CEO) and President are two such key persons who hold the top positions in the organization and highly misconstrued.

Although, it is important to note that, they differ in their designations, as it brings power, authorities, roles and responsibilities with it. Take a read of the article carefully to know more about the two personalities.

President, as the name suggests is the person who presides over an organization. He is the senior-most officer of the organization after CEO, who is the head of the branch or division of the company. He is responsible for looking after the day to day business operations and logistics and proper implementation of the organization’s policies as per the directions of the top-level executives. Further, depending on the size and nature of the organization, the job responsibilities of a president may differ.

The President, leads, guides, directs and motivates the vice president, managers and other executives of the organization. He is also responsible for the development and implementation of the strategy, maintaining the company’s overall performance. He can also present recommendations to the BOD.

CEO, an acronym for Chief Executive Officer, is the highest level officer or executive of the organization, who is subordinate only to the company’s Board of Directors (BOD). The BOD fixes the roles, responsibilities, powers and authorities of the CEO, on the basis of the legal structure of the organization.

The CEO is responsible for increasing the organization’s wealth and making all macro-level decisions, like decisions relating to the company’s policy, objectives, strategy, and so forth. He is also responsible for the formulation and implementation of a high- level strategy. Further, he can advise and make the recommendation to the BOD on various matters. He is in charge of the overall operations, resources, and performance of the organization. The CEO acts as an interface between the board and the various levels of the company.

Key Differences Between President and CEO

The differences between President and CEO can be drawn clearly on the following grounds:

So, with the above discussion, it might be clear that CEO is senior to President and the difference in their roles and responsibilities can be seen in larger organizations. But it is also true that in the case of smaller organizations, the role of CEO and President is performed by a single person. While President focuses on the present, the CEO is concentrated towards the future.

Difference Between Executive and Non-Executive Director