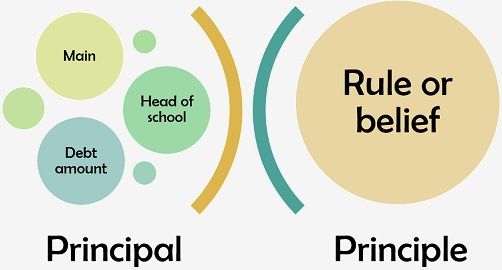 Principal, means the main element, the senior most person in an organization. On the contrary, Principle implies the primary belief of fundamental importance that governs the life of an individual or acts as a rule on which something operates.

There are many words in English that not only look alike but also sound alike and one such pair of words is ‘Principal and Principle’. Nevertheless, these two words are not similar in their meaning, but as they are homonyms, people commonly use them interchangeably which is wrong.

Now let’s have a look at the given examples, which will help you in understanding the difference between principal and principle.

Basically, ‘Principal’ refers to the individuals, objects, elements or any other thing, which is the most important part of a greater whole. It has several meanings, which we are going to discuss as under:

The word principle is used to refer to a law, rule, doctrine, a fundamental assumption or truth that acts as the basis for a set of beliefs, behaviour, reasoning or how something works. Come let’s understand where we can use ‘principle’ in our sentences:

Key Differences Between Principal and Principle

The difference between principal and principle can be drawn clearly on the given points:

You can remember the difference between principal and principle by recalling their meanings with the last two letters. While you can connect principAL with substantiAL, materiAL or cruciAL whereas principLE can be associated with ruLE.

Difference Between Everyday and Every day

Difference Between Another and Other

Difference Between Moral and Morale