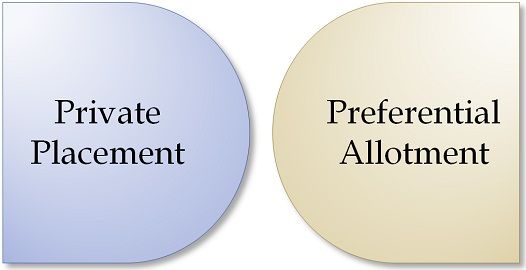 To invite general public, for subscribing the shares of a company, it makes a public issue, by way of an Initial Public Offering (IPO). However, when a company seeks to raise funds, without making a public issue, then it has the option of the private placement, wherein, the securities (shares and convertible debentures) are issued to private investors, not exceeding 200 members in a financial year.

The private placement implies selling of securities, i.e. debentures or equity shares, to private investors, with the aim of raising funds for the company. According to section 42 of the Companies Act 2013, the private placement is one in which a company makes an offer to selected persons such as mutual funds or insurance companies by issuing a Private Placement Offer Letter and satisfying the conditions thereon.

The offer or invitation to subscribe for securities can be made up to 200 persons or less, in a financial year, not including qualified institutional buyers and securities issued to employees by way of Employees Stock Option Plan (ESOP). If a company makes an offer or invitation to offer to issue or enters into an agreement to issue shares to persons more than the limit prescribed then it will be considered as a public issue and regulated accordingly.

Preferential Allotment is used to mean the issue of specified securities by a company listed on a recognized stock exchange, to any select person or group of persons, on preferential basis. The offer is subject to the rules and regulations made by Securities and Exchange Board of India, in this regard. However, when an unlisted company goes for preferential allotment the rules of the Companies Act, 2013 will apply.

The offer can be made to any person whether they are equity shareholders and employees of the company or not. Following regulations must be complied with, in relation to preferential allotment:

The points presented below explains the difference between private placement and preferential allotment:

Both Private placement and Preferential allotment require special resolution, to be passed at the company’s general meeting. Further, in both the cases, the company does not make an advertisement to the general public.

Many times, the investment bankers suggest the firms wanting to go public, to make a private placement, because the public issue requires a critical mass, to justify an Initial Public Offering.