Disinvestment is just the opposite of investment, i.e. it means pulling out the money invested in the company by selling the stake, either partially or fully. It is driven by the effective use of the resources, to earn the highest returns out of the money invested.

On the contrary, Privatization is a transition of government-owned company, operation, unit or division to the privately-owned enterprise. It happens when more than 51% of the shareholding of the government is transferred to private hands.

The development of a nation is highly dependent on the growth of the industrial sector and its growth. Privatization of various sectors is in vogue since the last few decades, as it is believed that there is a tough competition in the private sector, which brings in better offerings at reasonable prices and less corruption.

In simple words, Privatization implies the complete or partial sale of government’s equity in a state-owned undertaking, to the private sector.

Privatization can take place in two ways, i.e. either by selling government-owned shares in an undertaking or lifting the restrictions that block private individuals and firms to take part in a particular industry. It also includes contracting out services provided by the public sector with private contractors.

When there is a transfer of ownership, control and management, from the public sector to the private sector, specifically due to the sale of assets, it is called Privatization. When the transfer becomes effective, the government ceases to be the owner of such an undertaking. This change has a great impact on government revenue, which can be positive or negative.

There are eight ways in which privatization can take place, namely: 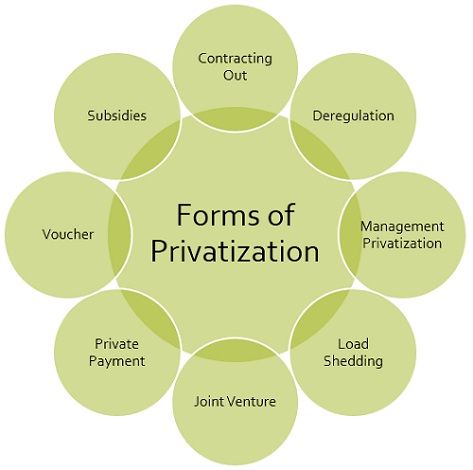 The benefits of privatization can be visible only when it is implemented with proper planning and cooperation. There are three points which should be considered while effectuating it.

Disinvestment refers to a strategy of selling off or liquidating some assets like plant, division, subsidiary, unit, etc, owned by the government or the organization. The strategy is adopted to reduce the losses incurred from non-performing assets, pulling out investment in a specific industry or sector, or to raise funds.

The strategy is commonly used by the government, by selling the shares of a Public Sector Enterprise (PSE) in which the government (centre or state) owns a majority stake, so as to raise funds. The proceeds received from selling the stake can be used in productive areas.

Key Differences Between Privatization and Disinvestment

The points of difference between privatization and disinvestment are discussed below:

Privatization and disinvestment are undertaken with the aim of improving the efficiency of the enterprise. However, these are highly criticized, due to political reasons and become a matter of debate these days.

Difference Between Members and Shareholders