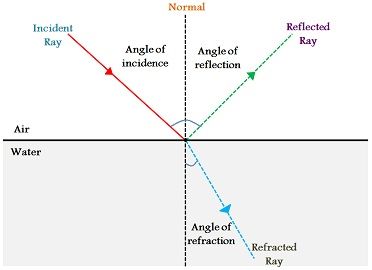 Our world is full of objects that we can see only with the help of light. If there is the absence of light in a room, nothing is visible to us. Have you ever wondered, how can we perceive things with eyes? In the daytime, it is the light rays coming from the sun, that help us to see objects, i.e. as the light rays fall on it, the object reflects light, which when received by our eyes, the object becomes visible. Likewise, there is a diverse range of phenomena concerning light that can be explored with the help of a thorough study.

So, take a look at the article to know the difference between reflection and refraction

In simple terms, reflection implies the rebounding of light, sound, heat or another object back to the source, without absorbing it. It alters the direction of the beam of light, when it falls on the plane, amidst two media, so that the ray goes back to the medium, in which it is generated. The law of reflection says:

These two principles are apposite to all kinds of reflecting planes. Reflection can be of two types:

Refraction can be understood as the phenomenon of light, wherein the wave is diverted when it passes diagonally through the interface between two media of different densities. It refers to the shift in direction and speed of the beam of light or radio waves, because of the change in transmission medium

Key Differences Between Reflection and Refraction

The points presented below are substantial, so far as the difference between reflection and refraction is concerned: