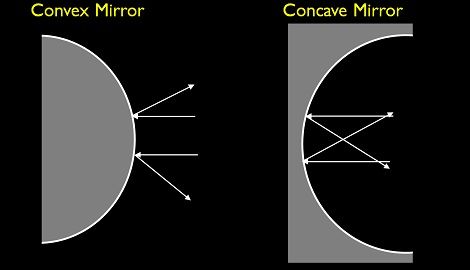 On the contrary, in a concave mirror, the reflecting surface bulges inwards.

The main difference between a convex and concave mirror lies in the image formed by the two mirrors, i.e. while convex mirror forms diminished image, the concave mirror either forms an enlarged image or a diminished one, depending upon the position of the object.

Convex Mirror or otherwise called as a diverging mirror, as the incident ray emerging from the same source (point), will reflect off and move in a different direction. Consequently, the light rays will not intersect on the object side of the mirror and form the virtual image of the real object. 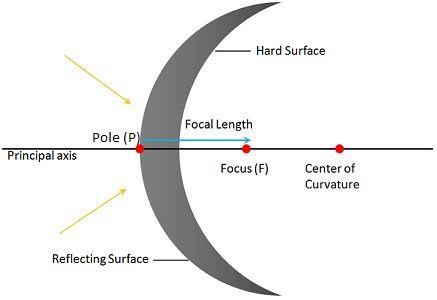 It is a type of spherical mirror, wherein the reflective surface is curved outwards, i.e. the source of light. It forms a virtual image when after reflecting from the mirror, the ray of light meets at a definite point. The image formed is erect, and diminished in size, concerning the object.

Look at the table, to understand the position and relative size of the image, formed by the convex mirror:

These mirrors are used as rearview mirrors in cars or motorbikes, ATMs, hallways of schools, hospitals, stores, etc., to help the people view, what’s happening behind them.

The concave mirror is the converging mirrors, due to the fact that when parallel incident rays fall on the surface of the mirror, the rays will reflect and meet at a particular point, i.e. focal point. Its shape is identical to a spoon. The reflecting surface of a concave mirror bent inward to focus, i.e. away from the light source. When the light is bounced by the curve up to a particular area, they form an image. 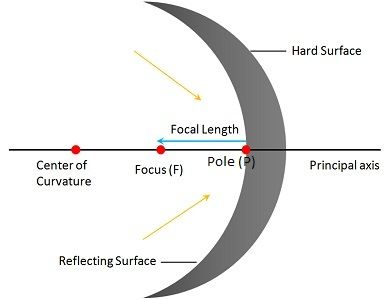 It can reflect images in two ways:

Look at the table below, to understand the image formation for various positions of object:

These mirrors are used as reflectors in the headlights of the cars, searchlights, projectors, etc. They are also used by dentists, or as shaving mirrors.

The difference between convex and concave mirror is explained hereunder:

By and large, convex and concave mirrors are the two types of spherical mirrors with many uses which is not possible with a plane mirror. The two mirrors are diametrically opposite to one another and produce different images at different positions.

Difference Between Area and Perimeter