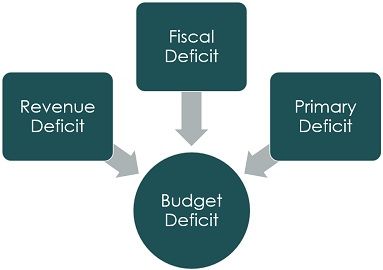 Revenue deficit indicates indebtedness in the present budget owing to total revenue receipts and expenses proposed in the budget. It is a situation when the revenue expenditure is in excess of the revenue receipt. All such transactions having an influence over the current income and expenditure of the government are covered here.

What is Budget Deficit

This written material will help you understand the difference between revenue deficit and fiscal deficit.

Revenue Account refers to the revenue on the current account, which includes typical Government receipts from taxes as well as non-tax sources. Tax receipts are the revenue generated from different taxes like income tax, gift tax, customs duty, GST, etc. levied by the government. And nontax receipts include administrative revenue, commercial revenue from public sector undertaking, grants, and donations, fines, income from the sale of spectrum, escheat, fees such as court fees, fines, and so forth.

Expenditure on Revenue Account is an element of government expenditure, which is incurred to purchase goods and services for consumption in a particular financial year. Hence, this expenditure is called consumption expenditure. This may include salaries, interest payments, and subsidies.

A Fiscal Deficit is a measure that expresses the entire shortfall in the non-debt resources to finance operations of the Central Government. It indicates the projected borrowing by the government to cope with its expenditures during a budget year. It is generally denoted as a percentage of GDP.

A fiscal deficit is when there is a difference between the government’s total expenditure and total receipts not including borrowings, during a fiscal year. The reason behind the exclusion of borrowings is that borrowings are not considered as a part of government receipts.

The fiscal deficit reflects the borrowing needs of the government, during a budget year, so as to finance the expenditure, including interest payments.

As we have discussed the meaning of these terms, let us now take a peep into the differences between revenue deficit and fiscal deficit:

Budget Estimates of the Government are given for the year 2020-2021 are given below:


Now, we need to calculate the revenue deficit and fiscal deficit from the given information:
Revenue Deficit = Revenue Expenditure – Revenue Receipts
= 6,000 – 4,000
= Rs. 2,000 crores

The implications of revenue deficit are: 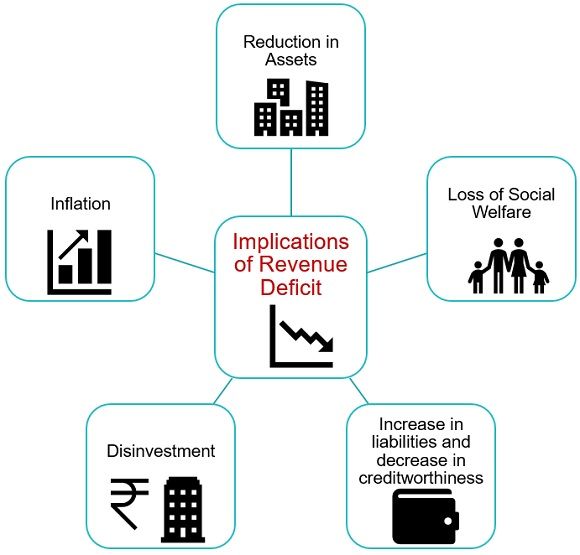 The implications of fiscal deficit are: 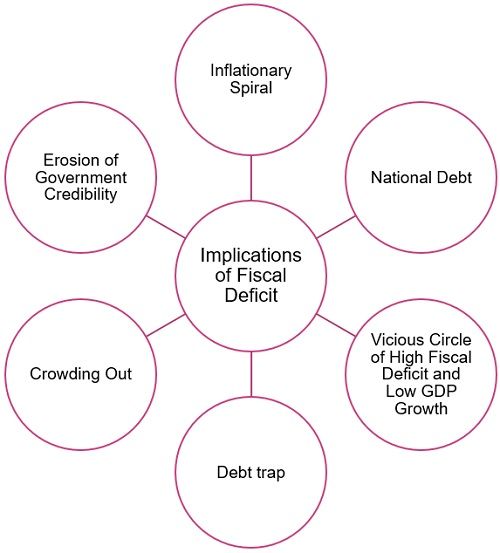 By and large, the government must take necessary steps to control the fiscal deficit to rise beyond the manageable level. In general, a Fiscal Deficit of around 3% of the GDP is regarded as manageable. High fiscal deficit is an indicator of fiscal indiscipline. It represents an economic situation wherein GDP growth is low and unemployment is high. Further, the economy moves towards stagnation and the revival becomes tough due to a lack of t foreign direct investment.

Conversely, Revenue Deficit indicates a shortage that has to be made up from capital receipts i.e. borrowings. To be precise it is a repayment burden in the future which do not match with any investment.

Difference Between Deficit and Debt