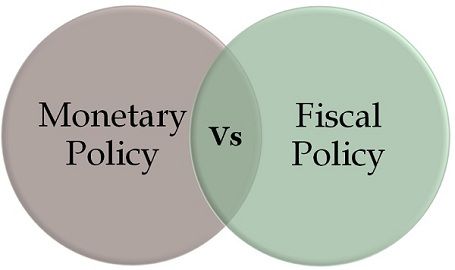 The economic position of a country can be monitored, controlled and regulated by the sound economic policies. The fiscal and monetary policies of the nation are the two measures, which can help in bringing stability and developing smoothly. Fiscal policy is the policy relating to government revenues from taxes and expenditure on various projects. Monetary Policy, on the other hand, is mainly concerned with the flow of money in the economy.

Fiscal policy alludes to the government’s scheme of taxation, expenditure and various financial operations, to attain the objectives of the economy. On the other hand, monetary policy, scheme carried out by the financial institutions like the Central Bank, to manage the flow of credit in the country’s economy. Here, in this article, we provide you all the differences between the fiscal policy and monetary policy, in tabular form.

When the government of a country employs its tax revenue and expenditure policies to influence the overall demand and supply for commodities and services in the nation’s economy is known as Fiscal Policy. It is a strategy used by the government to maintain the equilibrium between government receipts through various sources and spending over different projects. The fiscal policy of a country is announced by the finance minister through budget every year.

If the revenue exceeds expenditure, then this situation is known as fiscal surplus, whereas if the expenditure is greater than the revenue, it is known as the fiscal deficit. The main objective of the fiscal policy is to bring stability, reduce unemployment and growth of the economy. The instruments used in the Fiscal Policy are the level of taxation & its composition and expenditure on various projects. There are two types of fiscal policy, they are:

Monetary Policy is a strategy used by the Central Bank to control and regulate the money supply in an economy. It is also known as credit policy. In India, the Reserve Bank of India looks after the circulation of money in the economy.

There are two types of monetary policies, i.e. expansionary and contractionary. The policy in which the money supply is increased along with minimization of interest rates is known as Expansionary Monetary Policy. On the other hand, if there is a decrease in money supply and rise in interest rates, that policy is regarded as Contractionary Monetary Policy.

The primary purposes of the monetary policy include bringing price stability, controlling inflation, strengthening the banking system, economic growth, etc. The monetary policy focuses on all the matters which have an influence on the composition of money, circulation of credit, interest rate structure. The measures adopted by the apex bank to control credit in the economy are broadly classified into two categories:

The main reason of confusion and bewilderment between fiscal policy and monetary policy is that the aim of both the policies is same. The policies are formulated and implemented to bring stability and growth in the economy. The most significant difference between the two is that fiscal policy is made by the government of the respective country whereas the central bank creates the monetary policy.