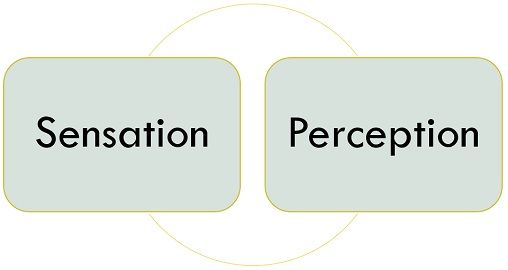 Do you know our sensory organs i.e. eyes, nose, ears, tongue, skin, etc. provide fresh information about the inside and the outside world? The primary experience of a stimulus identified by a specific sensory organ is called sensation. With this process, the information from the external world reaches our brain.

On the other hand, the process with which we interpret the sensations experienced by us in our day-to-day life and then we act upon them is called perception. In this process, an individual identifies, interprets, and gives meaning to the information supplied by sensory organs.

In general, we interchange the words ‘sensation and perception’ because these are cognitive processes, but there is a fine line of difference between these two in the sense that in the case of sensation, we don’t have to engage in the occurrence of the process actively, whereas perception is the interpretation of the information received through sensations. Hence, it is a mental activity that introduces us to the situation by providing direct knowledge of the same.

Sensation implies the way a human’s special sensory receptors and nervous system obtains and represents stimulus energies from our environment. It is the first response of a physical sensory organ or an organism to stimuli or we can say that it activates the function of these organs. It is a physical condition or experience resulting from the stimulation of sensory organs. It is a process of detecting and encoding a number of physical stimuli.

It is the instant experience of stimulus attributes like hot, cold, soft, loud, etc, resulting from the stimulation of a sensory organ. It takes place when the receptors in the sensory organs are active, through which different forms of outside stimuli become neural signals in the brain.

So we can say that sensation is a cognitive process through which our nervous system and sensory receptors gather and represents stimulus energy from the physical environment.

The process that transforms external stimuli into neural activity is termed transduction.

There are five attributes of sensation: 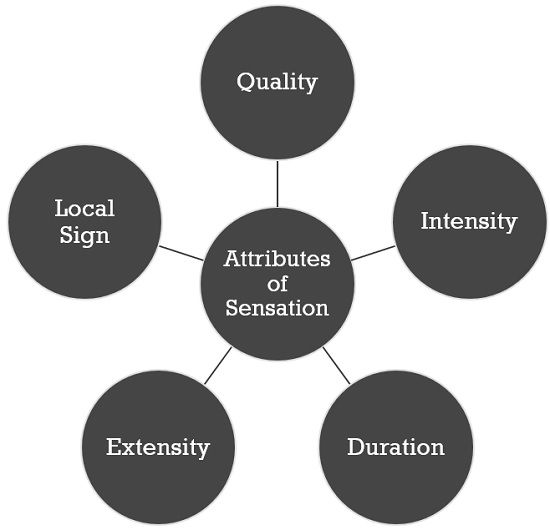 The two basic types of sensation are:

In simple words, perception can be understood as something which is experienced by way of intuition. Perception is a process that helps individuals organize and interpret their sensory impressions so as to add meaning to the data received. It is the meaningful interpretation of the data provided by the senses to the brain.

Nevertheless, it is also true, what a person perceives, may or may not be the same as the end reality. Everyone’s approach towards life is different and his behavior greatly depends on his perception.

It is a cognitive process that encompasses filtering or modifying the raw data received out of sensation to which an individual makes sense of the stimuli present in the environment, which can affect all senses. The basis of classifying stimuli is past events, feelings, and motives.

It is the primary source of a person’s knowledge about the external world and so his behavior is highly dependent on what he perceives about himself and the world surrounding him. It can also be defined as the way in which a person experiences the world.

Key Differences Between Sensation and Perception

After understanding the meaning of these two terms, let’s take a look at the difference between sensation and perception:

Concept of Sensation and Perception

At the time of the birth of a child, the infant lacks sensation and perception, as his/her organs are not developed completely. Due to which the infant is not able to differentiate between things and understand their meaning. However, with the passage of time, as the infant grew older, he comes to know the distinction between people and objects as well as he can also distinguish family members from strangers or outsiders.

Further, when the child uses his sense organs, he comes to know about the things that surround him and starts asking questions. Gradually, the perception ability develops over time, as he passes through adolescence.

The two terms, sensation and perception are regarded as material aspects of the mental development of a person. And none of the two are possible without the other one. While sensations are the constituents and basic element of perception, perception of the outside world that hinges on sensation.

Difference Between Illusion and Hallucination