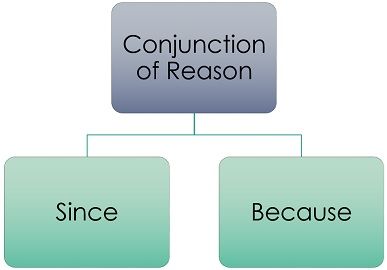 Conjunctions are linking words, that are used in sentences to combine two words, clauses, phrases, or sentences. Since and because are two causal conjunctions, which tells you why someone does something. ‘Since‘ can be used in two different ways in a sentence, i.e. it either talks about ‘time’, or it gives the ‘reason for something’.

On the contrary, ‘Because‘ refers to ‘by cause of’. Further, both in written and spoken English, because is more common than since when it comes to giving a reason. Now, let’s have a look at the examples given below to understand the two terms better:

The conjunction ‘since’ can be used in different contexts in a sentence. Hence it can be used in a variety of ways. It either talks about the reason or causes for something, or it expresses a specific time in the past when something took place, until now. The points given below explains the usage of since:

The word ‘because’ is subordinating conjunction which is used in a sentence to add an explanation, cause or reason for the happening of any incident. So, the clause introduced using ‘because’ is a subordinating clause, which adds to the meaning of the main clause and therefore completes the sentence. Let’s have a look at the examples given below:

Further the word ‘because of‘ means ‘due to‘ or ‘as a result of‘, which also highlights the cause that led to a particular event. Hence, it focuses on the consequence. See examples below:

Key Differences Between Since and Because

The difference between since and because are discussed in the points given below:

So, since and because both the words are used to express a logical connection amidst two events, but because is important as compared to since, in the sense that since indicates an indirect or not so important cause and effect relationship.

Difference Between On time and In time