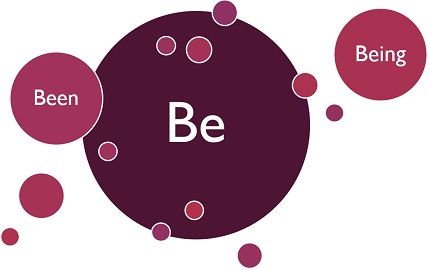 ‘Be’ is an irregular verb, which is used with prepositions to form sentences. The two forms of the verb ‘be’ are been and being that are commonly juxtaposed, during their usage. Been is used in sentences to outline some information about the subject, which is not present but from an earlier time.

On the other hand, being is used when an action is going on in the present situation. Further, it also expresses the state of existing. Let’s take a look at these examples to understand the terms better:

In these sentences, been and being, you might have noticed that these are used at different points. Been is used to provide information about the subject which is not the present one in both the sentences, while being in the first one, is used to reflect a sudden change in Rahul’s behaviour. On the other hand, the second one is used to denote the condition.

The past participle form of the word ‘be’ is ‘been’. Been is a verb, which is used to express some detail or information about the subject, which is not happening in the present, rather it is from an earlier time. It has a number of uses, which are discussed below:

In simple words, ‘being’ refers to someone or something which is existing. It implies the nature or behaviour of a person, which is only one time and not a regular behavior. Nevertheless, it cannot be used to show a person’s feelings. It is the present participle form of the word ‘be’, which plays the role of a helping verb in forming sentences in present continuous tense. Now we’ll discuss the uses of the word being in our sentences:

Key Differences Between Been and Being

The differences between been and being are discussed here in the points in detail:

One can easily distinguish between been and being by understanding their meaning and usage. As been is the past form of ‘be’, it is used indicates something which is not or currently happening, but happened some time ago, whereas being reflects something which is going on at present.