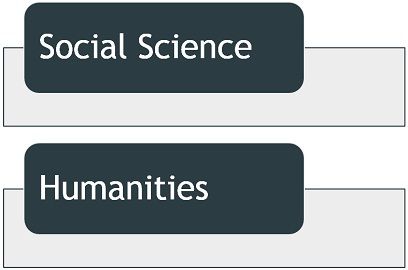 Social Science is a branch of knowledge whose subject matter is society and the interrelationship between individuals, as a member of society. Humanities is closely linked to social science, in the sense that the two disciplines deal with human beings and their culture. Humanities refer to the subject which tends to understand, acknowledge and analyze the human behaviour in all its depth and scope.

Practically, as a human being, no field of study is more significant than social science. It helps an individual to understand the society as a whole, i.e. the conditions which limits our growth and development and the opportunities which can be tapped for better livelihood. It helps in creating a society where human beings can live freely and happily.

In this discussion, we will talk about the main differences between humanities and social science.

Social Science, as the name signifies, is a science of society or say a science which studies the socio-cultural aspects of the human affair. It is that branch of knowledge which is concerned with the study of society, its interpersonal relationship with individuals (members) and its functioning.

In other words, social science is all about people living along in groups, families and communities, i.e. how they live, how they interact, how they behave, which language they use for communication, what traditions they follow, what do they wear, what is their religious affiliation, which ideology they promote, etc.

The study is based on the origin, organization and development of the human society, in the context of the relationship between individuals in society.

Its objective is to understand all the facets of society, along with finding solutions to the problems encountered by the society.

Humanities is a popular field of study, which is concerned with human society and culture, which makes use of qualitative methods which are mainly analytical, critical or speculative. The subject matter of humanities is thoughts, creations, development and actions of humankind in the past and present.

It tends to determine the defects in the mankind, as well as the ways to improve them. Basically, humanities attempt to make a man, more human. And for that, it prescribes an ideal behaviour for an individual to be called as a cultured human being.

Humanities explain an individual about his/her origin, genesis, neighbours, forefathers and also about the self. It introduces us to the living being who we have never seen, places that we have never been, stories we have never heard and ideas which we never wondered.

It is a multifaceted domain which covers anthropology, archaeology, history, linguistics and language, literature, philosophy, psychology, law and politics, Arts, etc. Researches in humanities adds to the existing knowledge base about the world. It shows the variance in culture and communities across the globe and across time.

The difference between humanities and social science can be drawn clearly on the following grounds: