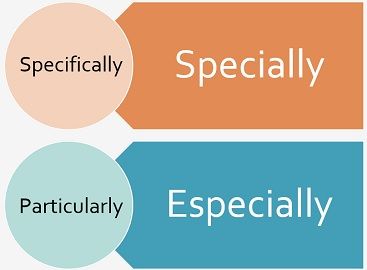 Specially, is an adverb which is used to tell you something serves a particular purpose. On the other hand, especially is also an adverb that is used to emphasize someone or something over all others. These two words are highly confusing homonyms, as people usually do not understand which one to use, in a sentence. Read out the two examples, which will help you to know the difference between them:

So, you might have noticed that these two adverbs are used at different positions in the given cases. In the two cases specially indicates ‘specifically’, whereas especially refers to ‘particularly or before all else’.

The word special is an adjective which means something which is not regular or usual, i.e. it denotes notable or exceptional. Its adverb form is ‘specially’ which refers to ‘for a particular purpose’. It is used to indicate the intention or purpose of doing or developing something, i.e. for which something has done or for whom something is done. Let’s have a look at the points given below to understand its usage:

The adverb especially is used when there is something much more than the ordinary, i.e. above all other things present. This is mainly used when you want to emphasize someone or something having an edge over the others. However, it can also be used in other contexts also depending on what the sentence means. The points given below will help you to understand its usage:

Key Differences Between Specially and Especially

The points presented below are substantial so far as the difference between specially and especially is concerned:

You can easily know the difference between specially and especially by understanding their meaning. When something is created or done to serve a different and particular purpose, you use special, whereas when you want to single out someone or something over the rest, you use especially.