We all know that demand for a product is mainly affected by its price, but there are some other factors which can also affect its demand. One such factor is ‘Price of Related goods’, wherein the term ‘related goods’ means complements and substitutes. In simple words, Complementary Goods are the goods that complete each other. This means that such goods are used in conjunction with one other, which enhances their value. In other words, these goods have no value when they are consumed alone.

On the other hand, substitute goods are those goods that compete with each other. Meaning that these goods can be used as a replacement for another good. The relationship depicted by complements and substitutes are covered under ‘Cross Demand‘.

What is Cross Demand?

Cross Demand or cross elasticity of demand, determines the responsiveness of the consumers in the quantity demanded of one commodity, in case the price of another inter-related commodity increases or decreases, while other things remain constant. The sign, i.e. plus or minus, plays a significant role in the cross-price elasticity of demand, as it determines whether the commodities are complements or substitutes.

In this write-up, you will get to know about the difference between complementary goods and substitute goods.

Substitute Goods, as the name suggests, are the goods that are perceived as an alternative to one another by the consumer, i.e. they can be used in place of each other in consumption. Such goods have the capability of satisfying human wants with the same ease.

When the two goods are developed with similar technology or contain the same ingredient, serve the same purpose and their price is approximately equal, they are called Substitutes. In such a case, an increase in the price of the product leads to an increase in the quantity demanded of its substitutes.

For example, there will be a rise in the total number of train ticket bookings, if there is a rise in the fare of aeroplane tickets. 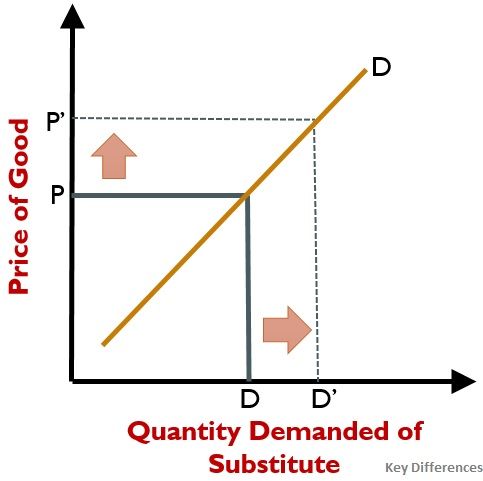 If the cross-price elasticity of demand is positive, its size determines how closely the goods are capable of being substituted. Therefore,

Complementary Goods are defined as the goods which are used or consumed concurrently, so as to satisfy a particular want. This means that these goods are needed jointly, to serve the purpose.

For Example, A increase in the price of computer will lead to a decrease in the demand for the software package. 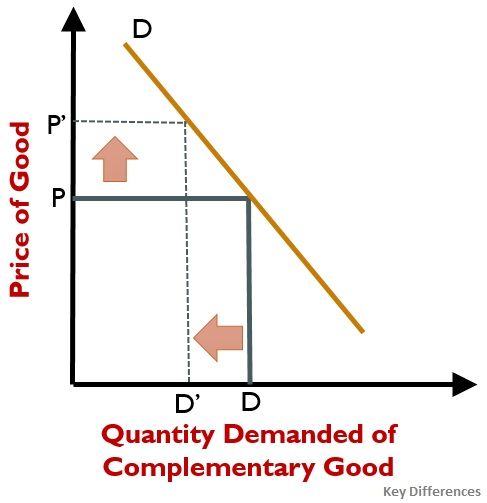 When there is a change in the price of a particular commodity, it will react oppositely to the demand for the other commodity, which is associated with the primary commodity.

Therefore, there is an inverse relationship between the price of a particular commodity and demand for its complementary item, while other things remain constant. And because the cross elasticity of demand between them is negative, the demand curve is downward sloping.

The size of the cross-price elasticity of demand is an indicator of how strongly the two goods complement each other. Therefore,

The points given below are important so far as the difference between substitute goods and complementary goods is concerned:

Suppose there are two goods Air Conditioner and Cooler, which are commonly used as substitutes by the consumer. The change in their prices and quantity demanded are given in the table below:

As you can see, the price of AC has increased, whereas the price of cooler is constant, leading to an increase in demand for coolers. 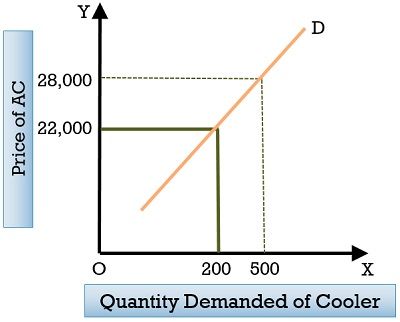 Suppose there are two goods Laptop and Battery, which are complements to one another. The change in their prices and quantity demanded are depicted hereunder:

In the given schedule, you can observe that as the price of laptops increases, the demand for laptop batteries decreases. 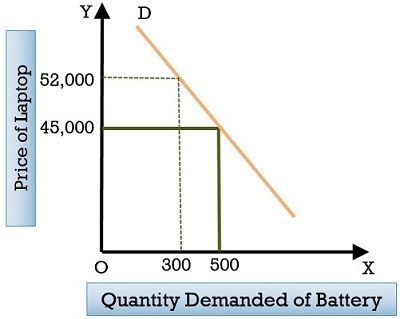 So, with the above discussion, it is quite clear that the change in the price of related goods has a great impact on the quantity demanded of the main product. While the price and demand relationship in the case of substitutes is directly proportional, it is inversely proportional in the case of complements.