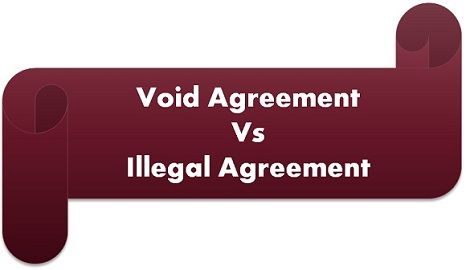 By learning the distinction between the two types of agreement, you will be able to understand that which one is void and which is unlawful i.e. illegal. So, take a read of the given article carefully.

The term ‘void’ means no legal binding and ‘agreement’ means consensus between parties regarding a course of action. To simply, put a void agreement is an agreement which is not legally binding, i.e. an agreement which lacks enforceability by law is void.

A void agreement loses its legal binding nature when declared void. Such agreement does not create any rights and obligation for the parties, as well as the parties, do not get any legal status. The transactions associated with the void transaction would be valid.

The difference between void and illegal agreement can be drawn clearly on the following grounds:

After reviewing the above points, it is quite clear that the void and illegal agreement are very different. One of the factors that make an agreement void is the illegality of the contract, such as contract whose object or consideration is unlawful. Moreover, in both the two agreements loses its enforceability by law.