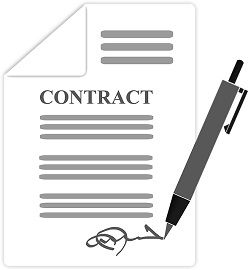 A void agreement is void ab-initio, in essence, it is null since it is formed. But on the other hand, a void contract is one that is valid at the time of creation but eventually becomes void, due to certain circumstances, which are beyond the control of parties concerned.

In finer terms, it can be said that a void agreement, is always invalid, but if we talk about the void contract, is one that is enforceable in the beginning, but subsequently lacks it due to changes in government policy or some other reason. So, here we are going to havein-depthepth discussion on the difference between void agreement and void contract, So, let’s get started.

A void agreement is defined under section 2(g) of Indian Contract Act, 1872, as an agreement which cannot be enforceable by law, i.e. such agreements cannot be challenged in the court of law. Such an agreement lacks legal consequences, and so, it does not confer any rights to the parties concerned. A void agreement is void from the day, it is created and can never turn into the contract.

To become enforceable, an agreement must adhere to, all the essentials of a valid contract, described under section 10 of the act. Thus, in the case of non-compliance of any one or more, essentials of a contract, during its creation, the agreement becomes void. Some agreements which are expressly declared as void, include:

Example: Suppose, Jimmy offers David (minor) to supply 1000 kg of wheat for Rs 20000, at a certain date in future, but B does not supply the stated quantity of wheat to Jimmy. Now, Jimmy cannot sue David, as David is a minor and an agreement with minor is void ab-initio.

Void contracts are valid, when they are entered into, as they conform to all the conditions of enforceability, laid down under section 10 of the act and are binding on the parties, but later on becomes void because of impossibility to perform. Such contracts becomes unenforceable in the eyes of law due to:

Example: Suppose Nancy, a popular dancer contracts with Alpha Company, to dance in a show. Unfortunately, met an accident some days before the event, in which her legs injured badly and not allowed to dance by the doctor. In such a case, the contract becomes void.

The following points are noteworthy so far as the difference between void agreement and void contract is concerned:

Therefore, with the above discussion and example, you might be able to understand the terms in detail. While a void agreement does not create any legal obligation. On the other hand, the legal obligations created during the formation of a valid contract comes to an end, when the contract becomes void.