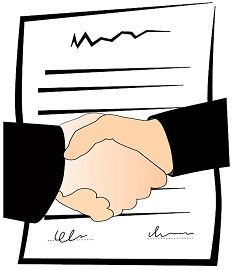 An MoU contains the description of understanding between the two parties, including the requirements and responsibilities of the two. These two are legal documents, which are often confused for one another, but the fact is they are different. So have a look at the article to have an understanding on the difference between agreement and memorandum of understanding.

The agreement is referred to as a state when two parties agreed upon the same thing, in the same manner, i.e. ‘consensus ad idem’ to work together for achieving a common objective. It can be in oral or written or implied form and can be legal or illegal.

The agreement consists of a proposal which is to be accepted by the party to whom the proposal is made, and when this proposal is accepted, it becomes a promise of parties to each other, to which they have been agreed upon. The parties to the agreement have the right to go to the court in the event of non-performance of the agreement.

Below are the types of agreement:

Definition of Memorandum of Understanding (MoU)

A Memorandum of Understanding (MoU) is referred to as a written legal document which completely describes the principles of an arrangement between the two or more parties forming a bilateral or multilateral agreement duly signed by the parties.

The Memorandum of Understanding between the parties must clearly mention the terms of the agreement, i.e. the objective should be definite to which they agree upon. A clear understanding should be there between the parties, regarding the intention which should be followed shortly. A MoU lacks legal enforceability, however, if any one of the parties has done anything against the MoU and due to this the other party has suffered any loss, then the aggrieved party has the right to recover loss because the parties are bind by estoppel.

Key Differences Between Agreement and Memorandum of Understanding (MoU)

The significant points of differences between an Agreement and Memorandum of Understanding (MoU) have been discussed above, after which it would be easier to make a choice between these two terms.

Most of the business person, government agencies, legal bodies and individuals often use these two entities in their day to day life to deal with another party, to achieve a common objective. It must be clearly understood by the parties that, if they want their decisions to be binding upon each other, they can go for an agreement which gives the parties, their substantial rights, and further they can enforce it in the court of law. Whereas, if the parties do not want any legal binding upon them, they can go for MoU.