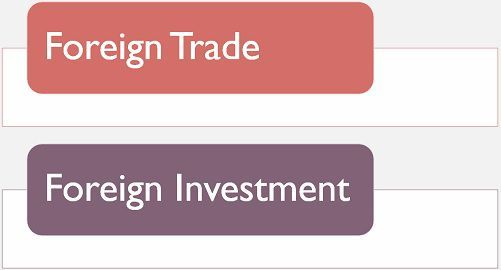 With the effect of globalization, the form of the markets has been changed all around the world, as well as it has also changed the way in which business is carried out in the past years. One of the major revolutions, as a part of globalization, is the foreign trade that implies the buying and selling of goods and services, in different countries of the world.

Next, there is one more drastic change as a result of globalization, i.e. foreign investment, wherein the individuals and companies invest their capital in the companies headquartered in another nation.

Foreign trade can be understood as the act of trading products and services in the international markets. It facilitates the availability of goods in the market of the country, different from where it is produced. It results in the increase of choice of goods, as the prices of the similar goods are almost equal. Therefore, the producers compete with one another.

Foreign trade is needed in a country to fulfil its resource requirements, meaning that the trade between two countries takes place because no country is self-sufficient. So, to meet out its requirement of natural or man-made resources, it engages in trade with the country, which possesses these resources in abundance. Further, the countries that are rich in certain minerals or other items find it beneficial to export it to other countries.

Foreign trade occurs in the form of import, export and entreport.

Foreign trade is subject to trade policy which are the directive principles and the control measures, that helps in administering the exports and imports of the country.

Foreign investment implies investment made by foreign nationals or foreign corporates in substantial proportion in the domestic company, in that they hold extensive ownership and also controls the management of the company.

In short, foreign investment is the introduction of foreign capital in a company which is based in a different country. So, it results in the movement of capital from one country to another. It can be in the form of:

The differences between foreign trade and foreign investment are discussed in the following points in detail:

Both foreign trade and foreign investment leads to the increase in country’s Gross Domestic Product (GDP), which becomes an important source of economy’s development.

To sum up, foreign trade involves buying and selling of goods and services; in international markets, foreign investment is all about money invested for the long-term by foreign companies.

Difference Between Internationalization and Globalization