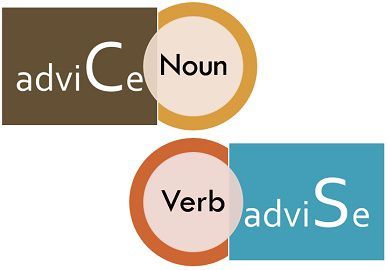 In English, there are many confusing terms and one such pair of words is advice and advise, which not only sound alike but also look alike. Due to which people juxtapose these terms however these are different as in the word advice refers to the opinion, view, preaching, counsel, suggestion, recommendation or consultation.

On the other hand, advise is the act of giving or offering advice to someone, which may be the best possible action in a given situation. Let’s take an example to understand them better:

Basically, the noun form of the word advise is advice, so there are not many differences between these two words, still, their difference cannot be ignored.

The word ‘advice’ basically means an opinion, suggestion, recommendation which is offered or given by any person about what you should do or act in the given circumstances.

Furthermore, in the field of business and law, it means an official record or notice of financial transaction or contract.
Example: The company issued remittance advices.

The word ‘advise’ simply means offering a piece of advice to someone, under specific circumstances. It can be used in several ways, such as:

Key Differences Between Advice and Advise

The difference between advice and advise can be drawn clearly on the following grounds:

The primary difference between the two lies in their spelling and so in their pronunciation. While advise ends with ‘ise’ which can be pronounced as we pronounce ‘wise’, whereas advice ends with ‘ice’ whose pronunciation is similar to ‘mice’. Secondly, the advice is nothing but a suggestion, while advise is to give a piece of advice to someone.

Difference Between Council and Counsel

Difference Between Could and Would

Difference Between Disinterested and Uninterested

Difference Between Guidance and Counseling

Difference Between Say and Tell