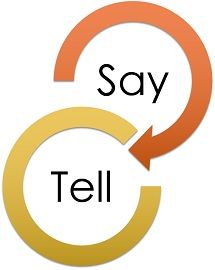 The words ‘say’ and ‘tell’ both are irregular verbs, as their past participle form, do not have a regular ‘ed’ ending, i.e. say becomes said and tell becomes told. While the word ‘say‘ is used to utter something verbally, ‘tell‘ can be used to give information, give evidence or orders to a person.

So, the first and foremost difference between these two is that we do not mention whom we are referring to, in the case of ‘say’, but we mention it in case of ‘tell’. Let’s take a look at the examples given below for better understanding:

In the above examples, you might have observed that with say you express your thought, feelings etc. But with ‘tell’ you inform someone about something or to direct someone.

Whenever you are uttering a word or speaking something, you are actually saying it. It is used to express your opinion, suggestion, feelings, emotions, etc. and also to deliver some information. It can be used in the following ways:

The word ‘tell’ is used to narrate, communicate, discern, instruct or announce something to someone. So, the name of a person or an object pronoun must follow the verb ‘tell’. The uses of say are given as under:

Key Differences Between Say and Tell

The differences between say and tell can be drawn clearly on the following grounds:

While using these two words in your sentence, you should keep in mind that use you do not use object pronoun with ‘say’, as it is used only with ‘tell’. Further, when something in expressed in the exact words, use said and not tell, as tell is used with instructions and command.

Difference Between Will and Shall

Difference Between Direct and Indirect Speech

Difference Between Assure and Ensure