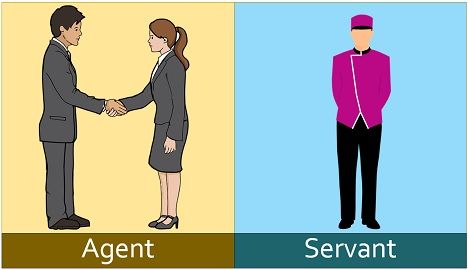 It is quite impossible for a person to perform all the business transactions, on his own. He/She needs someone for help, because of lack of time and business complexity. In such cases, people hire another person to perform work for them on their behalf. Such persons are Agents. The contractual agreement between principal and agent is the contract of the agency.

The word ‘agent’ is often confused with ‘servant’. A servant is one who serves others. The tasks performed by servants include – house cleaning, laundry, washing dishes, setting the table etc.

In this post, we have discussed the differences between agent and servant.

An agent is a person who works for another or works on behalf of another. This means that a principal hires an agent to represent him/her in dealings or trade with a third party. So, we could say that agent is the binding thread between the principal and third parties. 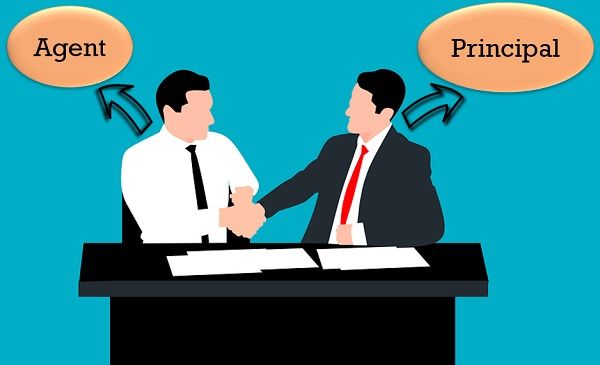 With respect to the contract of the agency, there are two important points that act as its base. These are:

Important: One must note that the Principal is held liable for those acts only, which are authorized by the Principal to the agent.

Who is eligible to appoint?

Well, any person who has attained the age of 18 years. Also, he/she should be of sound mind to appoint an agent.

Who is a Principal?

Any person for whom an agent performs the acts and is represented by the agent in dealings is the Principal.

Jayesh appoints Vineet to buy cloth material on his behalf for his cloth business. In this case, Jayesh is the Principal, and Vineet is Agent.

In this way, there is a special relationship between servant and master. Moreover, there are instances when a servant does some work for the master and as per law, the court assumes that the act is committed by the master himself. Therefore, if a servant performs any unlawful act, then the master will also be responsible if it is done in the course of his services.

The liability of a master depends on two main principles:

Note: The relationship between master and servant comes into being when the work is done by the servant under direct control and supervision of the master. Also, the work performed is subject to the knowledge and consent of the master.

Key Differences Between Agent and Servant

The points given below will explain the difference between agent and servant:

Based on the extent of their authority there are three types of Agents:

A person authorized to perform all the acts related to a particular trade, business or employment. His authority is continuous except otherwise terminated. His appointment takes place by way of a general power of attorney.

A particular agent is someone who is allowed to perform specific transactions only. Therefore, he has limited authority and it ends as soon as the act is performed.

Universal Agent is the one who has the permission to perform all the acts that his Principal can lawfully perform and the delegate.

Based on the nature of work performed, Agents are classified into:

A Mercantile agent is the one appointed to sell or buy goods of business in the regular course of business. He can also send or take delivery of a consignment of goods or raise money using goods as collateral. These are commercial agents.

These are non-commercial agents. It covers – advocate, insurance agent, wife, guardian, solicitor and so forth.

In a nutshell, a servant can be an agent too, but vice versa is not possible. Further, the rights and duties of an agent and principal will rest upon the contractual terms. However, there may or may not be any express contract between a master and servant.

Difference Between Consignment and Sale

Difference Between Principal and Principle

Difference Between Coercion and Undue Influence

Difference Between Unilateral and Bilateral Contract