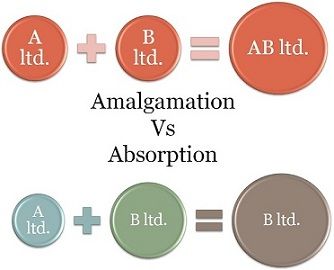 Amalgamation, as its name suggests, is nothing but two companies becoming one. On the other hand, Absorption is the process in which the one dominant company takes control over the weaker company. These are two business strategies adopted by the companies to expand itself and take a competitive position in the market. But, here one should know that Amalgamation can occur in two ways i.e. in the form of merger or the form of absorption.

Amalgamation is a process in which two companies liquidate to create a new company, which takes over the business of the liquidating companies. The transferor companies lose their identity to form a new company (transferee company). It includes absorption of one company by the other company. Accounting Standard – 14, issued by ICAI (Institute of Chartered Accountants of India) deals with Accounting for Amalgamation. Methods of accounting for amalgamation are Pooling of interest Method and Purchase Method.

In this process, the companies which go into liquidation is known as Amalgamating Companies or Vendor Companies whereas the company which is newly formed is referred to as the Amalgamated Company or Vendee Company.

The liquidating companies are of the same nature and size, who mutually decide to wound up the company to form a separate legal entity with a new name. The transferee company has the right over the assets and liabilities of the transferor company. There are various advantages of amalgamation i.e. synergy, expansion, reduction in competition, an increase in efficiency, etc. Amalgamation is divided into two categories:

In this process, the weaker company looses its identity by merging itself with the stronger company. The transferee company exercises control over the transferor company. The two companies differ in their size, structure, financial condition and operations. The companies either mutually take the decision of absorption, or it can be a hostile takeover.

The main reason behind absorption is gaining synergy, expansion, and instantaneous growth.

Key Differences Between Amalgamation and Absorption

The following are the differences between amalgamation and absorption:

In a nutshell, in Amalgamation, the two companies are liquidated to form a new company, but in Absorption, only the merged company goes into liquidation, but there is no formation of a new company. Here is an example which will clarify the difference, i.e. A Ltd. and B Ltd. joined to form AB Ltd., it is known as an amalgamation, whereas A Ltd takes over the business of B Ltd., so B Ltd. loses its existence, and only A Ltd. exists, it is known as absorption.

Difference Between Pooling of Interest Method and Purchase Method

Difference Between Merger and Acquisition