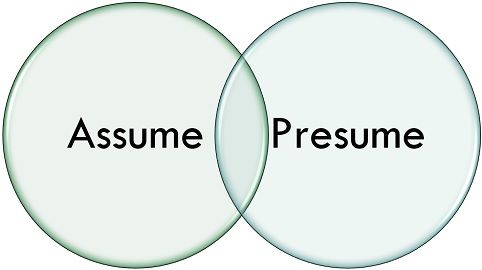 The words assume and presume are commonly used when we want to express something which we are believing of holding as correct or true before it actually takes place. However, there are some differences between assume and presume, as in, assume implies supposing something or taking it for granted, without having any proof or evidence against it.

On the contrary, presume means to suppose or take for granted that something is valid, which have proper evidence. Let’s look at the examples to understand them better:

In the given sentence, the word assumed is used in the first case, because there is no explanation or logic, but when it comes to the second case, presumed is used, as there is some logic behind her assumption.

The word ‘assume’ is a verb which basically means to accept something as true, but there is no evidence or proof against it. Further, it also means to take the form of something. It is used in the sentences in the following ways:

Presume is a verb, which means to accept something as true, on the basis of probability. Now come let’s understand how can we use presume in our sentences:

Key Differences Between Assume and Presume

The difference between assume and presume can be drawn clearly on the following grounds:

Both assume and presume mean the same thing relating to supposing or taking for granted, but there is just one difference between them, i.e. while we are assuming something we believe on it without any kind of evidence, but in case of presume, we have a reasonable or logical assumption.

Difference Between Imply and Infer