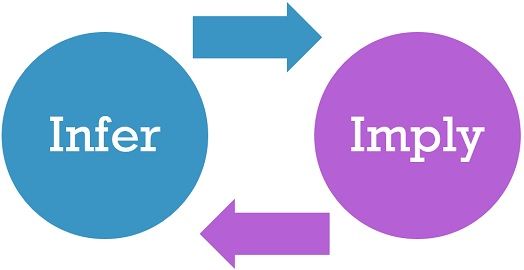 Imply and Infer are the two most confounding words in the English language, which people use synonymously, due to the interconnectivity in their meanings. Nevertheless, they are diametrically opposite terms, as ‘imply‘ means to tell or convey something implicitly, i.e. without directly expressing it.

On the other hand,’infer‘ means to arrive at a conclusion, considering the facts and evidence resented to you. Let ‘s understand this with an example:

With these two examples, you might have observed that imply and infer are two exactly different terms. What we imply depends on the verbal and non-verbal signs. On the other hand, what people infer depend on their level of understanding, perception and standpoint.

Imply means to convey a message which can be a feeling, opinion, suggestion or an idea, to the other party, without expressing it outrightly. We use the word imply when the speaker, writer or actor is communicating an indirect message, either verbally or non-verbally. Let’s look at the examples below:

By the term ‘infer’ we mean to make an opinion, assume something as true or arriving at a decision, on the basis of the information, facts, premises and evidence that is available to you. Infer is used when the listener, reader or the viewer is receiving or catching the message sent by the party and drawing conclusions out of it.

Key Differences Between Imply and Infer

The points given below summarizes the difference between imply and infer:

From the above discussion, it may be clear to you that imply and infer are not synonyms, in the sense that while imply means to signify, to indicate or to suggest something, infer means to conclude, to generalise or to surmise something.

Difference Between Assume and Presume

Difference Between Memo and Letter